A legend ultimately related to the so-called ” Puerta del Sol” , one of the oldest accesses to Toledo, well preserved and currently can be visited inside. This door receives its name from the existing representation of the Sun and the Moon on the sculptures of the imposition of the Chasuble to San Ildefonso.

The Warden Fernando Gonzalo ruled the city of Toledo despotically and with no regard. Anything mattered to him rather little except staying in power, and even the King he now revered had at one time faced off to get his office. He drowned the people of Toledo with excessive taxes, unjust measures and without listening to anyone’s advice… The same King had confirmed him in office to avoid gossip and without knowing that he was a person tremendously hated by all Toledo people. The maidens feared that his gaze would be fixed on them, for several had already received insinuations and threats if they did not accede to his favors… 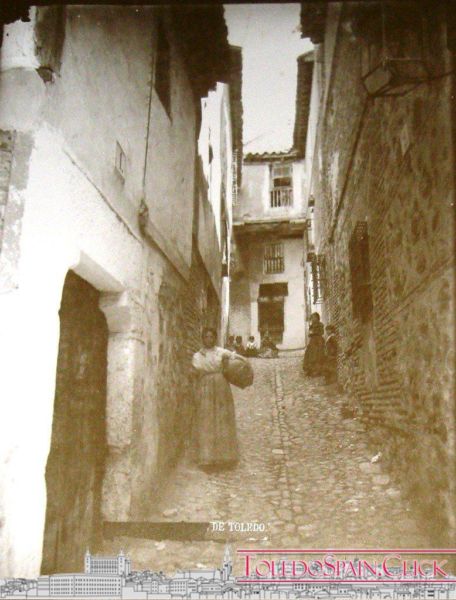 One of these threats was the one that gave name to an alley very close to the Church of San Justo, in which lived a young mother of two beautiful creatures whose beauty was recognized throughout the city.

The young woman had to avoid the many suitors she had, as her husband had died some time before and she had to survive with her two children on the scarce income received. One day on her way home, she crossed the street with the Warden who, impressed by her beauty, decided that it should be hers. At the first exchange Fernando Gonzalo tried to receive the favors of the girl in a thousand different ways, without receiving any response, to which he decided to devise a diabolical plan to get access to the bed of the young woman: would kidnap their children .

Callejón Niños Hermosos in Toledo, in 2017

The plan was easy to carry out, as it had certain ruffians from the city who did their ” dirty work” . The children were put in safekeeping and the Warden sent a message to the young woman that if she wanted to see them alive again, she should accede to their requests, adding that it would be of no use to him to go to justice, as he was the highest authority in the city.

The anguished young woman, desiring to preserve the memory of her late husband, struggled between the lives of her children and her honor, which the Warden vilely attempted to defile in this despicable manner.

It was fortunate that in those days King Fernando III ” El Santo” with all his Court stopped in Toledo, and as was customary, a day was proposed for the monarch to listen in audience to the neighbors of the city to see how everything was going in this area of his kingdom. The Warden mounted a great throne in Zocodover where the King would listen to the neighbours, and so he received them one by one, going up to the dais and prostrating himself on his knees before him. No neighbor dared to denounce anything of the Warden, for fear of reprisals, until it was the turn of the young woman whose children had been kidnapped.

The woman threw herself at the feet of the sovereign crying out for justice, and upon observing this, the warden’s face became white with terror, seeing in the figure of the kneeling woman the one who had been blackmailing. He tried to prevent the woman’s statement, indicating that it was too late, but the King, interested, instructed the woman to begin her story.

The latter, grateful, referred to the monarch when the warden had done harm by kidnapping her children, and the dirty intentions he had with her and against many other cowardly Toledans who did not dare to denounce the numerous tropelias committed by him and his henchmen… To all this, numerous voices from those present began to accuse Fernando Gonzalo, for which he, seeing himself cornered, tried to escape, being immediately imprisoned by order of the King, and calling him immediately to an executioner so that without further delay, he would execute the death sentence he justly deserved for the suffering caused to his neighbors.

Legend has it that after the children were returned to the woman, Ferdinand III ordered the Puerta del Sol to be carved with a relief representing the heads of the two children so that no one would ever forget this story, and everyone would be aware that their King would always defend the causes of the most just, and not the villains.

The relief mentioned in this legend, in the Puerta del Sol of Toledo. Photo: Arturo GS on Flickr.com