The most famous of all the paintings painted by El Greco, ” The burial of the Lord of Orgaz ” is in the Toledo church of Santo Tomé, being visited daily by numerous tourists. A masterpiece of the Cretan painter, explained in a thousand and one works and treatises on Art, what is perhaps less well known is his legend or ” miracle” , which we offer below.

Don Gonzalo Ruiz de Toledo , señor de Orgaz (he was not a Count, although the painting is popularly known as such) was one of the nobles most loved and appreciated by the people of Toledo. He was familiarly linked with powerful families that during the 13th and 14th centuries directed the destinies of Castile, and this origin assured him a well-off life, but his pious and devout character led his existence along roads closer to those he least had, being a benefactor and protector of foundations and religious orders, until his death on 9 December 1323.

He contributed in life to numerous causes, such as the cession of houses to the Augustinian Fathers, the restoration of the churches of San Justo, San Bartolomé and Santo Tomé, the creation of the hospital of San Antón…

His death was received by all the Toledans with deep sadness, and many went to the Church of Santo Tomé to say their last farewell to one of the people who had done most for the benefit of religion and the city of Toledo.

The procession that took Don Gonzalo’s body through the streets of the city, covered by his best armor, chiseled by Toledan artisans, was accompanied by numerous nobles, friends and regular and secular clergy.

In the interior of the Church of Santo Tomé, his burial place, the prayers had already finished and were about to hand over the body to his tomb when suddenly everything was illuminated with a very intense light coming from above, and those present could see how the figures of St. Augustine and St. Stephen descended, took in their hands the corpse of the Lord of Orgaz, one by the shoulders and the other by the feet, taking charge of carrying it to the tomb themselves.after this action, with a deep voice the two saints said:

” Such an award is given to those who serve God and His saints” .

Then, without further ado, they disappeared, leaving the church perfumed with heavenly scents.

All who observed this were petrified there, murmuring prayers of thanksgiving for the miracle they had witnessed. In the interior of the tomb, still to be covered, already rested the body of Gonzalo Ruiz de Toledo, taken to him by two saints. humility led him to choose for eternal rest the most remote and poor area of the Church, as well as the materials of his burial: next to the last and most distant wall of the choir and of simple coarse stone.

A simple chapel was made there until 200 years later, the parish priest, Andrés Nuñez de Madrid, had it renovated making it bigger, leaving the sepulchre in the middle and, wanting the miracle to be known to everyone, commissioned a painting to be placed on the wall of the chapel, next to the altar. 23 October 1584, after checking the endowment that Gonzalo Ruiz de Toledo himself had left for the benefit of the Church of Santo Tomé, the Cardinal Archbishop of Toledo don Gaspar de Quiroga authorized the work.

This commission was the consequence of a lawsuit won by the parish priest mentioned in the Chancery of Valladolid: Don Gonzalo left in his will that the people of which he was the lord, Orgaz, had to pay annually to the parish of Santo Tomé the tribute of eight pairs of hens, two rams, two wine hides, two loads of firewood and 800 maravedís. In the 16th century, the council of Orgaz stopped paying this charge, which, being claimed, was paid in its entirety and facilitated the commissioning of the painting so well known to all.

In 1586 a Greek painter named Domenico, known as ” El Greco” , who lived not far from the Church where the lord of Orgaz was buried, was commissioned to paint a picture reflecting the moment in which this miracle took place. On 15 March 1586 an agreement was signed between Don Alonso and El Greco in which the iconography of the lower part of the canvas was fixed very precisely.

The payment would be made after an appraisal, and the painting would have to be finished by Christmas that same year. The work lasted longer and was delivered in the spring of 1588. It was valued by Luis de Velasco and Hernando de Nunciva at 1,200 ducats, an amount that seemed excessive to the parish priest, in comparison with the 318 of the ” Expolio” of the Cathedral or the 800 of the ” San Mauricio” of El Escorial.

In the absence of an agreement, the Archbishop’s Council had to intervene, which determined that the 1,200 ducats of the first appraisal should be paid. 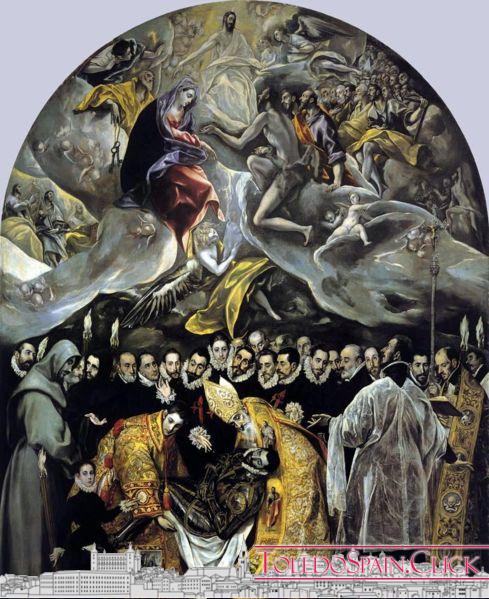 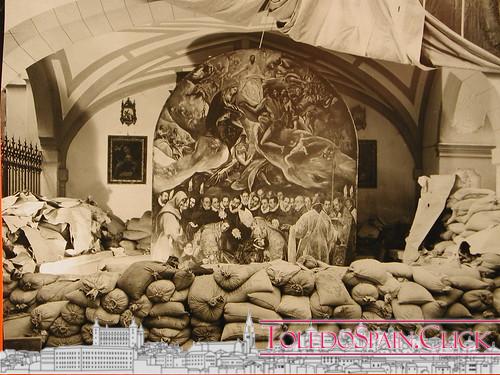 The Burial of the Count of Orgaz, protected against bombardment

Photo: The Burial of the Count of Orgaz, protected with earth sacks during the Spanish Civil War. Source: EduardoASB in Toledo Forgotten (Flickr.com)