The cold, very present these days, is not something new in the city. Has any reader of this website seen the Tagus as it passes through Toledo totally frozen?

” It was andelado the Tagus from part to part, it was MCCXXIX.” 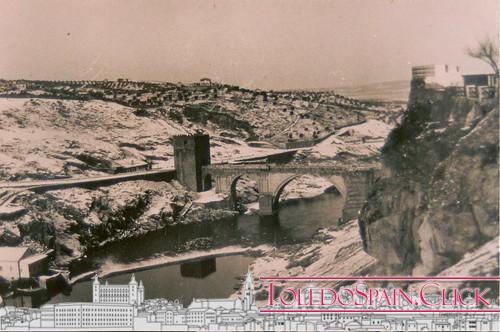 It is the only time that the Annals noted such an extraordinary drop in temperature in the Tagus valley, which rarely occurs in this area, as it requires at least -18 º. Subsequently and approximately once a century, there is evidence of this phenomenon, the first in 1536, when

” the Tagus was frozen in such a way that the children played on it and danced, crossing it even with knights”

” the Tagus froze as it passed through Toledo everywhere, except in the streams of the dams”

And finally, in an imprecise date of the end of the 19th century, according to Dr. López-Fando, to whom his paternal grandmother related it, adding that the ice layer was strong enough to set up a drink stand under the bridge of Alcántara, which was prudently ordered to be removed by the governor of the province (Julio Porres M. Cleto: ” Los anales toledanos” )

.
Sure you’re also interested: What to visit and do in Toledo during the December 2018 bank holiday

Does anyone doubt that the cold these days is a rare occurrence? Perhaps in the last 30 years… It has been a long time since we Toledans saw snowing twice in the same year, although history once again shows us that we were wrong.