Toledo’s cathedral contains a large collection of treasures, art, curiosities…, and also legends. In the choir an image of the Virgin is admired and venerated, under the title of Our Lady the White, made in white alabaster with golden polychrome. And as it could not be less in Toledo, it also has its legend.

For many months the festivities and tributes for the wedding of Beatriz de las Roelas and Don Santiago Galán in 1569 were remembered in Toledo. Beatriz was known for the nobility and generosity of her family and Santiago was a young nobleman who, having been orphaned as a child, was taken under the protection of the house of Orgaz. It was the Lady of Orgaz who made a special effort to ensure that both young people consistiesen in the marriage.

Beatriz was a faithful devotee of the White Virgin of the Cathedral of Toledo, whose image served as a divine witness the day they contracted marriage and fidelity forever. This Virgin is in the centre of the cathedral choir and has always been venerated in Toledo under the name of Nuestra Señora la Blanca.

The couple’s first few months went by happily and happily, away from problems, miseries and penalties. One afternoon everything changed suddenly, when Beatriz announced to her husband that he would be a father, but contrary to what was expected, she observed with astonishment that sadness appeared on the face of her beloved, because this very day the Lord of Orgaz had ordered her to command part of his troops and go to war.

More resigned than understanding in the face of so much sudden misfortune, she swore to him that she would go every day that her absence lasted to prostrate herself before the image of the White Virgin so that she would protect him on the battlefield and take care of her and her future son until his return.

Long and distressing months passed. The firstborn was born with his father’s name. Occasionally news of the fighting arrived but no reference to Santiago.

Every afternoon Beatriz and her son crossed the immense and solitary spaces of the Cathedral to prostrate themselves before their Virgin asking for protection for their beloved one and a sign that everything was going well, that he would return healthy and they would be happy, but the intense devotion of the toledana did not manage to pull off any divine sign that would give her the hopes she needed to continue waiting. 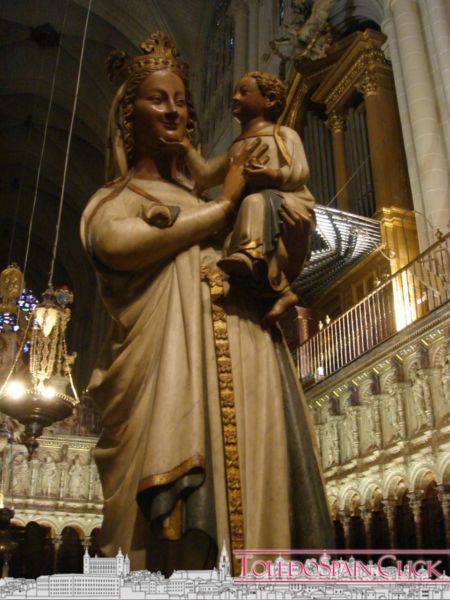 More than a year passed without any news of Santiago. Among the circles of the Toledan court no one was waiting for the return alive and some even proposed celebrating a mass for the dead for the soul of the wretched man.

The alleged widow refused, assuring that her husband was under the protection of the White Virgin and would return. The family began to worry, even fearing that she would lose her mind, when the number of daily visits to the image of the Virgin increased.

Two or even three times a day, she crossed the naves of the Primada, accompanied by little Santiago, to continue showing her devotion.

That September 8, the feast of the White Virgin, it had been a year and a half since anyone knew anything about Santiago. That day she sat down with her son on the first of the benches, before the attentive gaze of all those attending who already thought she was crazy.

But after the ceremony something happened. People realized that Doña Beatriz, with her face illuminated with happiness, was surrounded by a kind of light that stood out from the rest. When the rest of the participants looked for the source of light, they saw how the image of the White Virgin tilted her head and smiled openly.

At that moment, a noise of spurs took out of their astonishment and curiosity those who were there and when they turned their heads they saw an almost unrecognizable Santiago Galán, with a long beard, ragged clothes and signs of having passed much hunger.

The husbands embraced in the middle of the ceremony and Santiago met his son there, before the Virgin who had protected him for almost two years of battles and captivity.