In these times, in which some see themselves as possessors of supreme reason, in which the arrogance and confrontation they provoke are not precisely qualities of men of faith , and in which the supposed defense of their Creed imposes a tension among people long forgotten, we bring to these pages a beautiful legend with a very significant title. 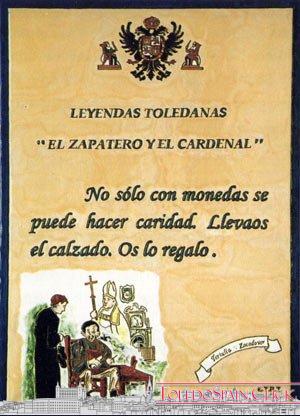 We do not intend in these pages to give moral classes to any prelate , nor man of faith, but we do bring a legend from Toledo that could well illustrate, even by its title, the involvement of certain religious powers in political fields, and how for centuries, popular wisdom wanted to see in their ecclesiastical leaders what we do not have today: humility. ” Apply the story,” or in this case, the legend.

This legend tells the story between a humble Zapatero and a famous Cardinal from Toledo.

Centuries ago, the central Martín Gamero street, very close to the Cathedral, the union of the Four Streets with Tornerías, housed shoemakers’ workshops. Not of those who mended the old, but of those who with their hands created authentic works of art in the form of footwear, made to measure, and sometimes for the wealthiest of the city.

One winter morning, of which the fog runs like shreds between the corners of the old streets of Toledo, a young student entered one of the workshops and in an educated tone, although somewhat dry, addressed the shoemaker saying:

– Good morning, shoemaker. Look at the shoes I’m wearing… Do you think they’re adequate to withstand the cold of this city?

The man left his job and looking down he saw that his shoes were in quite bad condition and had lost in good shape the luster they once seemed to have had: ” It looks more like you are going barefoot,” said the shoemaker.

The young student ordered a new pair from the shoemaker and, taking the measurements, pointed out that in about three days the order would be ready.

After this time, the young man entered through the door of the workshop, tried on his shoes and seeing that they fit his size and were comfortable he indicated to the shoemaker:

– I don’t have much money now, because I am a student, but rest assured that I will pay for your shoes when I become Archbishop of Toledo.

The shoemaker was surprised by what he heard from the young man, but seeing that the work was already done and that he would get little from it, he thought that there are many forms of charity, and he made it known to the student, also stating that if he needed anything else he would not hesitate to stop by his workshop.

The young man thanked the shoemaker and was impressed by the good heart of this man who had willingly given his work and time to a stranger. He insisted again on his promise to pay for his shoes when he was Archbishop of Toledo.

Years passed, and the shoemaker grew older. He had no sons and ended his days humbly and without too many resources. One fine day, a canon knocked on his door, claiming to come by order of His Excellency the Archbishop of Toledo, who required the presence of the shoemaker.

The latter, surprised by such an unusual convocation, accompanied the entourage to the Archbishop’s Palace, wondering what he wanted from him such a high person.

After going through long stays, he arrived in front of the Archbishop, who smilingly said to him: dear friend, first of all I want to thank you with a hug and then I want to pay you a debt I have had with you for a long time, but which I have not forgotten.

The shoemaker, almost frightened, had totally forgotten the promise of that young student and remained very confused at the scene, believing himself wrongly led before his excellence.

– Many years ago now,” noted the Archbishop, ” when I was a poor student, I promised to pay you when I became Archbishop of Toledo. I have never forgotten your charity work with me.

And he took a bag of 50 ounces of gold and gave it to the shoemaker, who had remembered the old anecdote.

After this payment, he again thanked the shoemaker for his charity work and asked him if he wanted anything more from him.

– Nothing more desire, because this payment is much higher than the cost of those shoes. But I ask only one more thing: that at my death, my two daughters, who still live with me, will not be abandoned to their fate.

Do not worry, said the Archbishop finally, for your daughters will be properly cared for.

They comment that this legend, and the final promise of the Archbishop, who was none other than Cardinal Silicon, served for the foundation of the College of Noble Maidens, whose first students would be the daughters of the humble shoemaker.

Juan Martínez Silíceo , whose second surname was actually Guijarro, was a preceptor of Felipe II, after being named after his father, Carlos I, in 1543. Before this date, the Cardinal, who obtained this position in 1556, taught at the University of Paris and held the chair of natural philosophy at the University of Salamanca. He promulgated the first statute of blood cleansing, antecedent of legal discrimination against converts. He wrote a mathematics manual, Ars arithmetica (1514). He died in Toledo in 1557.

The Colegio de Doncellas Nobles , founded by Silíceo, and located in the Plaza dedicated to this Cardinal, was originally known as ” Colegio de Nuestra Señora de los Desamparados” , having an allocation of 6000 ducats so that 100 maidens could live who were endowed with 100,000 maravedís when they got married. The intention of the school was to prepare these young women to be good ” housewives” , because those who decided to wear the habits of a nun did not receive any dowry. Nowadays it is a residence for students and it houses several dependencies of the Regional Administration. (See situation in Googlemaps)

– Place this legend on Googlemaps.