Félix Izquierdo Antonio sends us ten drawings made with nibs from different places in the city of Toledo. These are magnificent works that you can now see on this website, as a ” virtual exhibition” .

Note : wait for all the images to load on the Web and click on them to enlarge.

If you are interested in the drawings, there is contact information for the author at the end.

On the banks of the Tagus River and located 529 metres above sea level, in the heart of the Castilian plateau, Toledo is one of the main monumental sites in Spain. 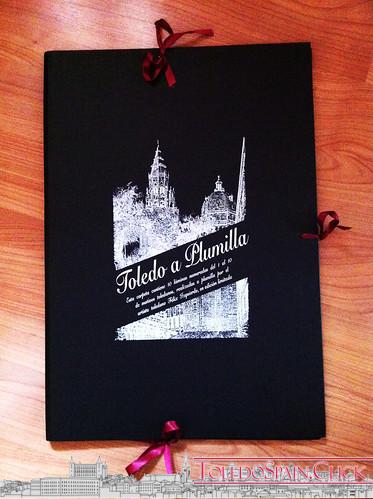 Folder from Toledo to Plumilla

The first signs already speak of Toletum in the 4th century BC. Throughout the centuries Toledo has been a Celtiberian city, Roman city (Toletum), capital of Visigothic Spain, Muslim city (Tolaitola), seat of the School of Translators in the 12th and 13th centuries, cradle of Mudejar, imperial capital with Charles I and Spanish primate seat, among other historical events.

DOOR OF THE WATCH (Toledo Cathedral) 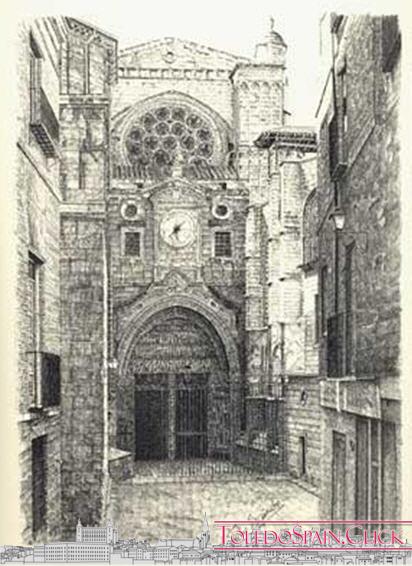 It is the oldest of the Cathedral, late thirteenth century early fourteenth. The clock of a single hand is on an ogival arch, above it, the oldest stained glass windows that are preserved in the Temple. The atrium is closed by a 15th century grille, at the top the shield of Cardinal Mendoza with Gothic decorations in the style of the grille. 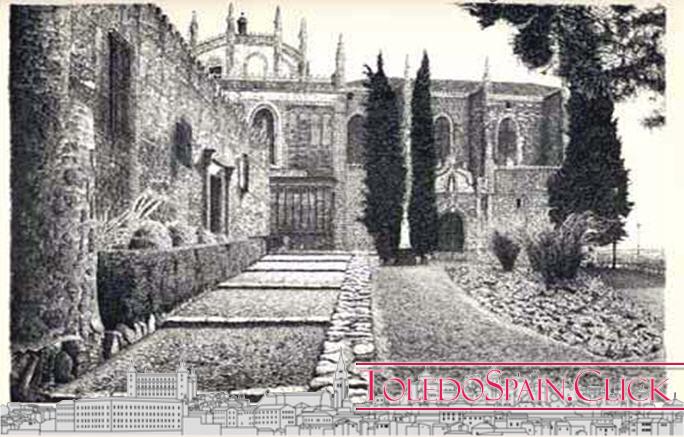 The monastery was commissioned by the Catholic Monarchs to architect Juan Guas and sculptor and decorator Egas Cuemas to commemorate the birth of Prince John and give thanks for the victory in the Battle of Toro. To the left of the drawing, the façade of the old palace of the Dukes of 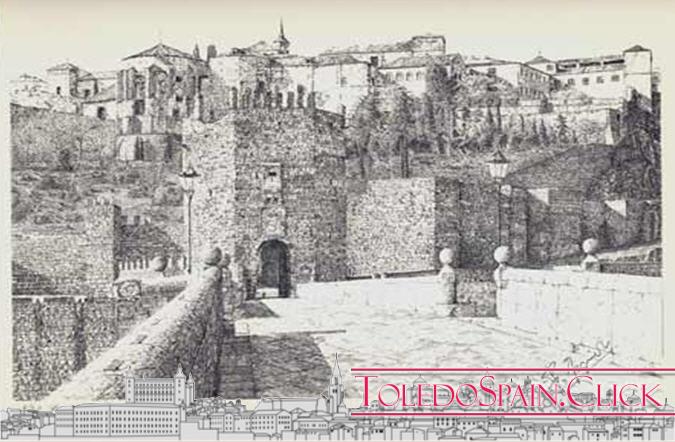 The bridge was a Roman road that crossed the Tagus River, an obligatory pass on the Zaragoza-Mérida route, and also served as a link with the south of Spain. 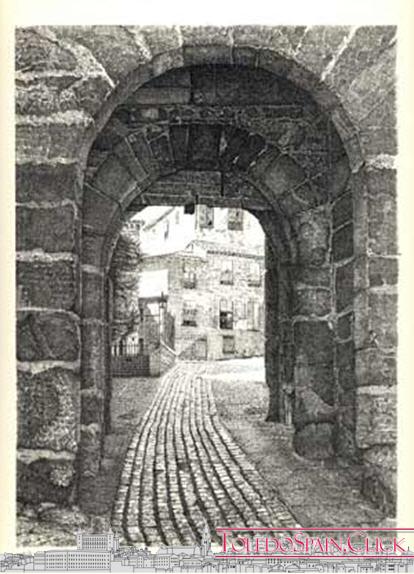 Situated on a steep slope next to the Cristo de la Luz, it forms part of the walled enclosure. It was originally called ” Bad Al Mardum” which means walled door. The upper part served as a prison, Muslim butchery, home of D. Pedro Laso de Castilla and welcomed the patients of tinea, leprosy and

scabies from the hospital of Saint Lazarus.

ERMIT OF THE CHRIST OF LA VEGA 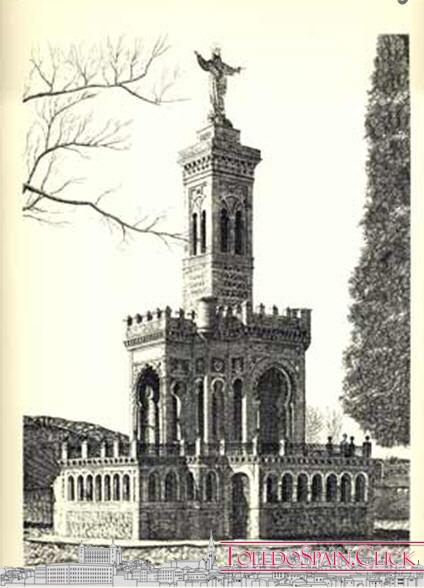 Monument to the Heart of Jesus in the courtyard of the hermitage. It consists of a neo-Mudejar building in the shape of a Greek cross on an area of 150m2. It is formed by three bodies (with a crypt inside) on which the image of the Heart of Jesus rises. Work of Tomás Jimena sculpted in

stone, hands and head are made of Carrara marble. The works were carried out between 1931 and 1934. 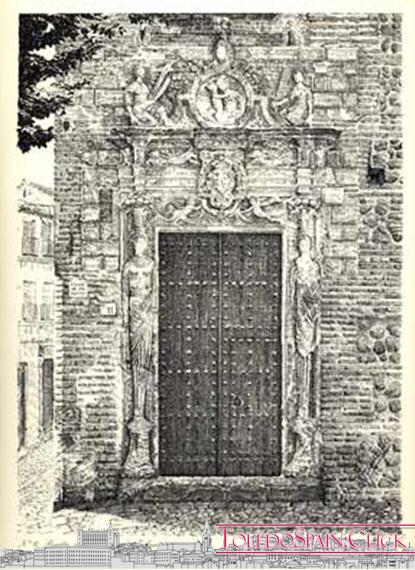 The door is located at the corner of the main façade. The Infantes School was founded by Cardinal Silicon to educate forty clerics in music and grammar; once their
is finished.
formation, they became part of the cathedral choir. The door is framed by two cenéforas and in its upper part by the shield of Cardinal Silíceo. Above the entablature decorated with masks, putti and newts, there is a beautiful tondo with the Virgin and Child. 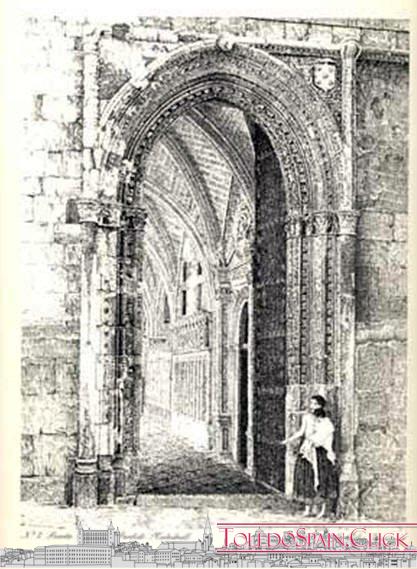 This door, like that of the Clock, has had several names: of Justice, of Forgiveness, of the Muffin, the latter because in it some bread was distributed to the poor people called Muffins. It is located next to the bell tower. The coat of arms of D. Sancho Rojas, 15th century, can be found on the exterior Gothic-style façade. Crossing the door we find ourselves in the lower cloister of the cathedral. 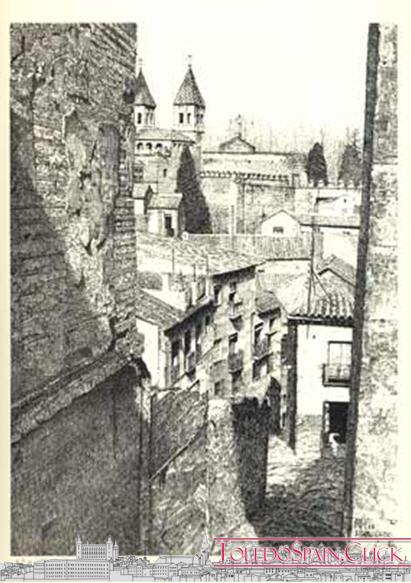 It is located in the Antequeruela neighbourhood. Like most streets in the city, it is a steep slope. In the background and in the upper part of the drawing the twin towers of the Hinge Gate, which served as a watchtower, stand out. The building on the left is now restored and converted into a hotel. 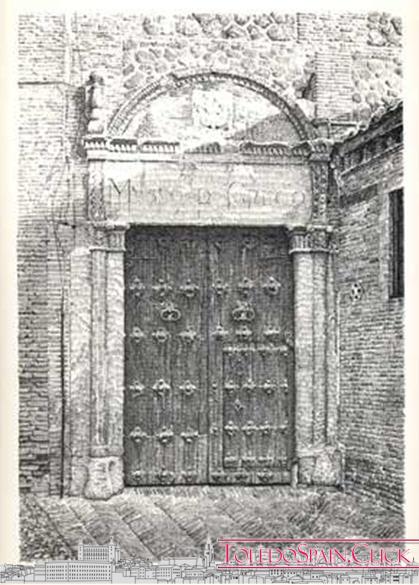 The door is part of the Museo del Greco. It was built on the initiative of the Marquis of La Vega-Inclán in 1910 on some Toledo houses from the 15th and 16th centuries that he bought from Mrs. Aldonza de Mendoza, granddaughter of Enrique II and known as ” La Duquesa Vieja” (The Old Duchess), in order to collect some works by the Cretan painter that were scattered throughout the city. 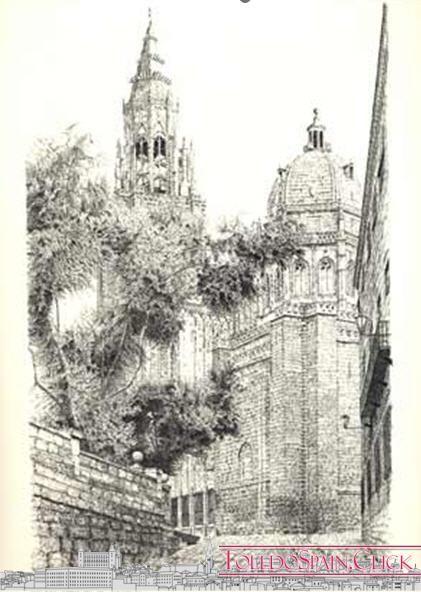 It is the most representative Christian monument of Toledo, its construction began in the year 1.226.

The main entrance is flanked by two towers that were originally designed to be twins, the right was unfinished, the left is the tower where the bells are housed. The best known of the nine bells is that of San Eugenio, popularly known as ” La Campana Gorda” (The Fat Bell). 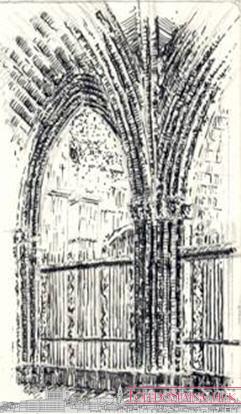 Cloister of Toledo Cathedral with nib

It seems exaggerated but, circulated through the streets of the Imperial songs like these:

In giving the prayer,

You go to the muffin.” 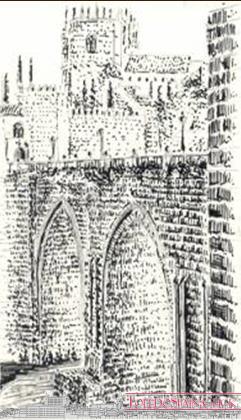 Bridge of San Martín with nib

(Legend of the Bridge of San Martín)