Skip to Content
Home Mysteries of Toledo Templars in Toledo

It’s been a while since we wanted to address this issue, the Templars in Toledo. If up to now we have made veiled references to the Order in some articles and legends, in this text we propose to address the traces that the Temple left in the city, not a few, but hidden and hardly visible today, as well as the ” fame” that these noble knights had. 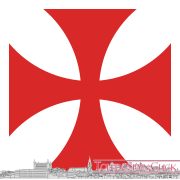 We will not in this article review the Order’s extensive history. By way of historical introduction, the Order of the Temple, or ” Poor Comilitons of the Temple of Solomon” , was founded for the defence of the Holy Places and the pilgrims who marched to them. Hugo de Payens and eight other knights are the founders of the Order, a total of nine, who would arrive around 1118 in the Holy Land to defend the sacred places from Muslim invasions, and to protect the ruins of the Sacred Temple. Its name comes from this Temple of Solomon, delivered to the order by Pope Baldwin II, in reward for the work done in these lands.

By 1170, some 50 years after its foundation, the Order already had knights in different countries of Europe, and began the escalation of wealth that would lead to its final persecution. By 1220 it was one of the most powerful organizations in the West, with numerous castles, its own fleet, and more than 30,000 knights, not counting different possessions and servants.

With the loss of the Holy Land to the Muslims, they moved their headquarters from Jerusalem (in the place occupied by the Temple of Solomon) first to St. John of Acre and then to Cyprus, after buying the island. At this point, they possessed sufficient wealth to make strong loans to European kings. The Templars had become the bankers of Europe. Their economic power was aimed at endowing the struggle in the East with funds and was articulated around two characteristic institutions: the Command and the Bank.

Insurance that you are also interested: Corpus Christi Toledo 2017. Information and programme of activities 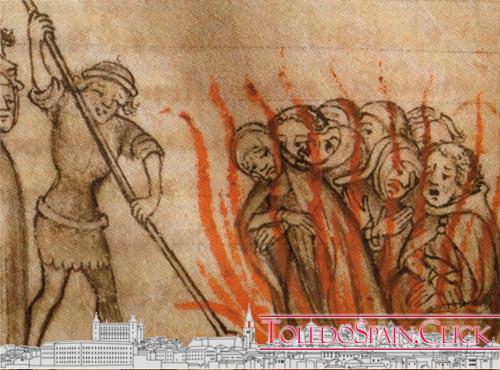 Burning of Templars in France (Wikipedia)

Philip IV of France, ” the Beautiful One” , was the heir of numerous debts with the Knights Templar. Using his influence, he got Pope Clement V to start a trial against the Templars accusing them of sacrilege to the cross, heresy, sodomy and worship of pagan idols (they were accused of spitting on the cross, denying Christ through the practice of heretical rites, worshiping Baphomet and having homosexual contact, among other things. On Friday 13 October 1307, Jacques de Molay, the last Grand Master of the Order, and 140 Templars were imprisoned in a simultaneous joint operation throughout France and subjected to torture, for which most of the accused pleaded guilty to these secret crimes.

Their possessions and wealth were literally shared between the European states and the Order of Hospitallers, and their members, in some cases tortured, condemned to death or dispersed.

These accusations (inspired mainly by the attainment of their goods and wealth) made grow among the people numerous legends and myths around the figure of the knights of tempera:

There are documentary difficulties in situating the presence of the Temple in Toledo, as well as in other locations in Castile. It is a tradition to place the knights in the Toledo district of San Miguel , and in as many villages of the province, as Luis Rodríguez Bausá points out in his excellent work ” Toledo insólito” (Unusual Toledo). This enclave of San Miguel still preserves the mystery and intricate labyrinth of streets and alleys that once had to have, and it is not complicated on any winter night with the intense fog that embraces the Toledo rock, to imagine a group of Knights Templar wandering along the path of their houses, located in the area.

Numerous legends embrace this brief space, very close to the Alcazar of Toledo and a few steps from the Cathedral, as well as known and dark toponyms, such as the ” alley of Hell” , the ” alley of the Devil” … Also the presence of subways is intense in this area, very close (and even below) the Church of San Miguel, associated with the Temple and retains the symbolism of the Order. It is in this area that the so-called ” Casas del Temple” , located near San Miguel, are located. Tradition places in these houses the hospice that this Order had in Toledo, which has been a well-known restaurant, with important architectural remains.

However, it is the

the one that conserves the most Templar symbolism. It has some tombstones in its soil, and since the 12th century it has been a burial place. Within its walls there is a Gothic capital with the coat of arms of the temple order, which is also engraved on one of the bells, testifying to the presence of the order in the parish church. Not far from there, Bausá also points out as a possible Templar enclave the ancient Hospital of San Bartolomé , another of the saints related to the Order. There is no trace of this enclave. Also nearby is the street of the Candelaria , another of the titles specified in the rule of the Temple as of obligatory adoration, or the nearby streets ” of the flower” and the already disappeared denomination of ” thorns of the Can” (today of the Can), being these two elements (the rose and the thorns) Templar symbols.

It is in this district where some of the most famous caves of Toledo’s complex soil are located, and many authors associate them with the Order of the Temple. It is probable that some of these tunnels, now blinded, connected the Church of San Miguel with certain houses in the neighbourhood, allowing the knights of the Temple to go to trades and other chores without stepping onto the street. We must highlight the complexity of the construction of these caves, since they were carved in the granite rock of the Toledan rock in times when the tools were manual, and of coarse and soft metals. Even today, with the current technique, it would be complex to carry out the complicated task of drilling the Toledo subsoil, as we have seen in the recent works of the Miradero, in which it has been necessary to use charges of explosives to remove rocks. Learn more about the caves in Toledo.

Numerous authors who have studied the Order of the Temple associate their most significant possessions with intense enclaves called ” magical” or point holders with a marked spiritual symbolism. Is Toledo perhaps one of those points? It is probable if we consider other points that the nomenclator associates with the Temple, such as the Plaza de la Cabeza, perhaps associated with the famous ” bafomet” that served as a spur against the Temple in the ” trials” during its persecution.

Were the Templar Knights of Toledo also aware of the hermetic wisdom traditionally associated with the city? It is complex to answer the question, and some authors, based on legends and stories described by others, conclude that it was so, and in these enclaves mentioned above they protected and kept the immense power accumulated over centuries, not only in material form, of relics and elements of power, but also of knowledge, which so many tried to seize after their persecution, with so little luck.

Another well-known Templar enclave of Toledo was not contemporary to the Order but originated by an important admirer of these: Juan Guas, builder of so many works of art in the form of architecture, among which stands out in Toledo ” San Juan de los Reyes“” Church of the Monastery of San Juan de los Reyes

In this temple we can read along its walls the Templar motto: ” Non nobis domine, non nobis sed tuo da gloria” -Nothing for us Lord, but for your holy name we must glorify-, and in the tomb of its architect, there appear drawn Knights Templar.

Finally, it is the Castle of San Servando , an important Templar point. Let us note that it occupies a strategic access route to the city, protecting the bridge of Alcántara, and already occupied since ancient times by all civilizations that have inhabited the city. It was a Templar castle until 1308. This Castle, as we have seen in these pages in numerous occasions, has been source of mysteries and legends. Today it is a very interesting hostel to stay in Toledo.