The most populous pilgrimage held in Toledo has as its protagonist one of the most visited areas of the city, and from which the best of the panoramic views is contemplated.

” La Virgen del Valle” brings together thousands of Toledans and people from the surrounding villages on the 1st of May in a fiesta that begins on the night of 30 April.

Every Toledan has ever been on this pilgrimage. The heat is usually present, in this year 2019 it seems that it will not do too much, with a maximum of 27 degrees (in other years is quite frequent storms and strong wind) The celebration the night before, with hundreds of young people camping or having fun in the area, is usually a host of problems for the authority: ambulance traffic, problems of order, small fires in the mountains …

Rare is he who does not try to climb (for the umpteenth time) to the stone that faces the city, and on which there is a beautiful legend … 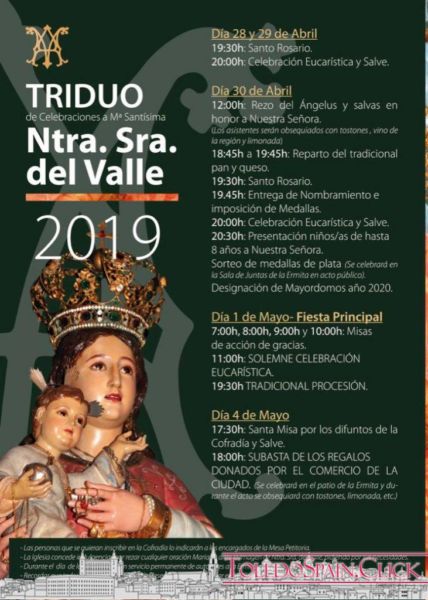 The omelette, potatoes, wine, family reunion or friends … A tradition rooted that the youngest take advantage of the night before, with tents and ” bottles” that have sometimes ended in disgrace. Do not forget the steep slopes of Toledo… The pilgrimage of the Valley around 1925. Photograph by D. Pedro Román Martínez

The hermitage is built on the foundations of the old hermitage of San Pedro de Saelicos, and its virgin is named after the place where the sanctuary is located, the valley of the city. The feast began on August 1st, but was soon changed to May 1st to avoid heat and danger.

The Virgin’s devotees come to the hermitage on foot from the city. Formerly, the river could be crossed from one side to the other in a boat, known as the passenger boat. Today it has been recovered for use on certain occasions, also in these days (read here how to cross the Tagus with the passenger boat). The Pilgrimage at the beginning of the 20th century

It is said that girls of marriageable age who ring the bell of the sanctuary find a boyfriend that same year, and those who already have one, get married before the end of the year.

Also taken as a symbol is the fennel of the surroundings, which is taken with great faith by women who are pregnant, as it is said to strengthen the mother for childbirth. The Pilgrimage, in 2010 by Toledo Imperial City

Image of the Pilgrimage of May 1, 2010, in Flickr.com by Toledo Imperial City (link)

And if you want to do something different for the May bridge, visit ” Visitas Guiadas Toledo” . They are unique in counting this city.

Some videos of the Pilgrimage of the Valley in Toledo