On the weekend of 4 to 6 May Toledo will once again host a ” Medieval Market” (this time Imperial), which will be installed on the Paseo de la Vega. In this case, it will be dedicated to the time of Charles I and will host continuous activities for all audiences, in addition to the usual sales stands of all kinds.

The youngest will be able to enjoy a Renaissance camp with a school for young knights, sword and rodela combats and musical and theatrical performances.

The market will take its visitors back to the Renaissance period in which Toledo was the capital of the Empire, and for this purpose it will have an endless number of proposals for all audiences, from a Renaissance camp with sword and rodela battles, mercenary rounds or a school for small knights, to a children’s corner with attractions and games for the youngest, musical parades or theatrical performances.

In total, more than 30 actors will bring to life imperial guards, knights and ladies with noble titles, monks, writers, as well as many other characters who will animate the days of the Imperial Market of Charles I, for which there will be companies of recognized prestige as La Recua Teatro or the Napoleonic Association.

Also, as could not be otherwise, will be installed numerous stands of crafts and gastronomy, whose regents will be dressed in clothes of the time to enrich, more if possible, the proposal, as reported by the City of Toledo in a press release.

You may also be interested in: Timetables and prices of monuments and museums in Toledo (Updated)

Full program of the Imperial Market of Charles I in Toledo: 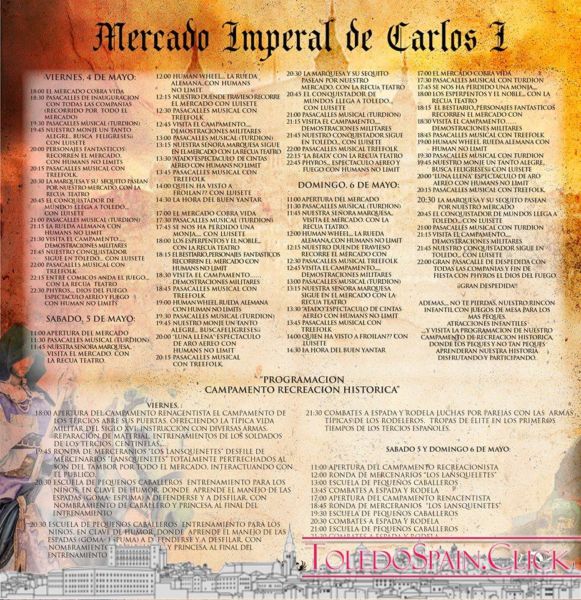 Carlos I Imperial Market in Toledo 2018