” Times were those of discoveries and wars for men, of loneliness and tears of absence for women. Italy, Flanders and the Indies were places where a youth covered itself with glory, writing history and drawing continents with the edge of its Toledan steels.

Times were those of discoveries and wars for men, of loneliness and tears of absence for women. Italy, Flanders and the Indies were places where a youth covered itself with glory, writing history and drawing continents with the edge of its Toledan steels.

Among the Toledan women of that time it was not, in truth, the one who offered the least prayers to her God, the young Doña Soledad de Vargas, a beautiful maiden of noble family and heart full of illusions, or rather, with a great illusion, sweet and torturing at the same time, in her naïve and simple soul, naïve and simple, in her heart. Doña Sol was in love. The winged goblin had shot his perfumed arrow that day when, barely seventeen years old, he had the courage to cut the most beautiful rose that adorned his balcony and throw it to the rider, cured of strange winds and gunpowder, who at the command of his mesnade of moustached soldiers of the thirds, had made caracolear his steed, while with the eyes and lips he dedicated the most delicate requiebro.

He was Don García de Ocaña, the most beloved ensign for his courage and courage of the now famous Extremaduran Don Pedro de Valdivia; his exploits in Flanders gave him the reputation of being one of the best captains of those thirds, and even Valdivia himself on several occasions had embraced him with tears in his eyes, moved by his bravery.

A few days after the two young men solemnly promised each other before Our Lady the Virgin Mary of the Tabernacle, don García had to leave for distant lands in search of Valdivia; the Indies, with their fabulous fantasies and realities, called them to the supposed glory of Spain.

Doña Sol was sad in her loneliness, remembering with nostalgia the scenes in which love had transformed her soul from a girl into a woman’s soul. But she was not pessimistic; she kept two promises in her heart: that he would love her always and that he would return soon. Candorosa, did not know that in love promises are pavesas that extinguishes distance and advances time.

And the distance got in the way and time went by monotonously. But Doña Sol trusted and knew how to wait. Long periods of prayer in her private chapel increased her hope. But many months passed and he never heard any news. It is true that the communications with overseas were not very fast then, but wouldn’t the delay be too long? Doña Sol thought one day that her prayers were not effective, no doubt, because they demanded little sacrifice, since it was not necessary for her to go out of the house in front of her little altar, always exuberant with flowers, to prostrate herself to ask for the one who was far from her. That night, then, she stealthily went out through an excused little door, accompanied only by Doña Mencía, a grumpy owner, as an old single woman she was, and by a faithful squire, bearer of the indispensable lantern and a very long blight under the cloak. 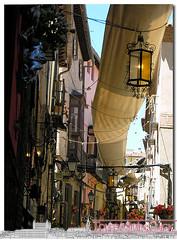 The journey was not long, because in the same street, and not far from the palace of the girl in love, there was a niche, dimly lit by an oil lamp, where Our Sorrowful Mother was shown, pierced her loving heart by the daggers of pain.

And before that picture of the Mother of God doña Sol prayed with great fervor, while the cold and the fear of being discovered there at such hours, put tremors in her limbs and tears in her eyes. . 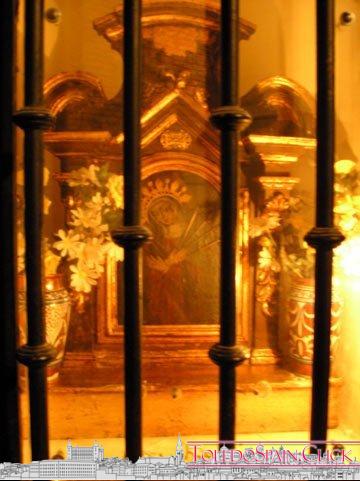 The next morning he knew, at last, of his beloved. A faithful squire brought news of how much glory Don García was obtaining in the distant and new lands bathed by the Pacific Sea, as well as the certainty that as soon as a successful enterprise was set up against the Araucanos, his lord would return to Spain to make his wife Doña Sol. Our maiden gave many thanks to the Most High for having listened to her prayers through her Blessed Mother, and since that day the niche of the Dolorosa was carefully cared for and adorned with the most beautiful flowers that Doña Sol could find; oil was also present in the former mortecina lamparilla; there was also what was undoubtedly most pleasing to María Dolorosa; the fervent prayers that every night, now unused hour, our little girl would raise before that little lattice altar.But days came when the devotion was defeated by the dream of the young woman, who before finishing the fifteen Mysteries of her Rosary, fell asleep on her scissor chair, until Doña Mencia swung that the prayer did not conclude with the desired promptness, and came to awaken her.

Great sorrow produced these modorras to the young woman, who believed she saw in it a sign of her little devotion when she asked for what she most desired. So, he gave order to the owner so that all those nights in which sleep interrupted her prayer, she would wake her up, sticking a pin to her without pity.

It goes without saying that Doña Mencía, who was being fed up at such an inopportune time, obeyed her mistress too much to the letter; and if waking up is rarely pleasant, it must have seemed much less to Doña Sol, judging by the scream she drowned out when she felt the small stab wound in her flesh; But, giving thanks to the owner, he continued praying until he finished his Rosary; then, he introduced the pin through the bars of the grille, leaving it there as an offering to the Sorrowful. 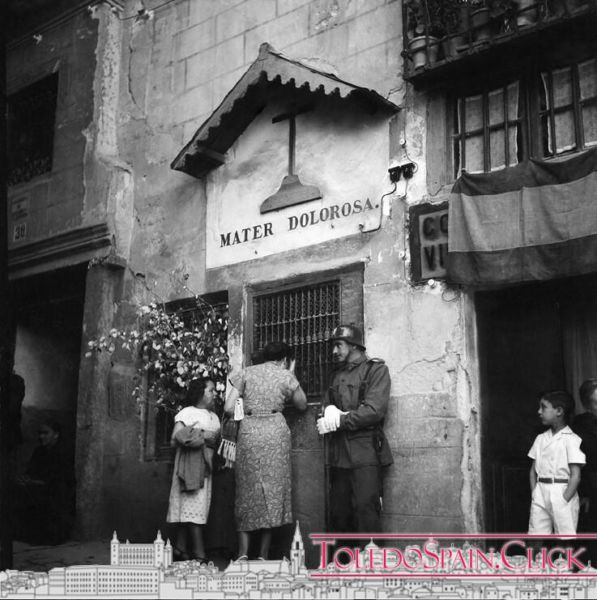 And so the nights followed one another and so the offerings increased, until God, without a doubt, who had mercy on the girl in love, brought don García back before the good owner left her mistress made a spoiled steelwork. Our young men married, and it is known they were very happy the rest of their life, and in truth that well won they had it, because if glorious scars there were him in Italy, Flanders and against the hosts of Caupolicán, not less numerous nor suffered with greater enthusiasm there was her while waiting for his return. 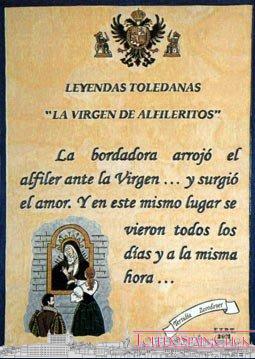 This is the legend of the Virgen de los Alfileritos, one of the best known in Toledo. A long time has passed since then, and the devotion to the Sorrowful has been transformed into the pious belief, on the part of today’s young women, that if a girl throws a pin into the niche, she soon has a boyfriend. and it is worth seeing the enormous amount of offerings that the small altar always has, before which, in the early hours of the night, it is not uncommon to witness how the beautiful Toledan girls who pass through that street, stop to place a pin and an illusioned prayer.

More information about the tradition ” Virgen de Alfilerios” and photographs in the blog Toledo Olvidado.