The harsh summer sun plummets over the streets of Toledo. Don Pedro Moraleda pushes the door of the Mesón del Sevillano, fleeing from the treacherous rays that devastate the paved area of Toledo. He sits down, asks for refreshments and listens to nearby conversations, as so many other times.

He immediately perceives that the parish is restless, not because the wine is watered down, as is customary. One group and another do not cease to comment on the strange situation of Doña Luz… Some affirmed that her eyes had a special color due to the work of the Evil One; others thought that it was due to the water of a certain cursed source from which she had drank; others attributed the strange brightness of her eyes to witchcraft, and some thought that Doña Luz was a good Christian and nothing of what was said was possible.

– It may be that Doña Luz is Lucifer himself,” added a woman of a certain age, crossing herself after speaking.

– Well, I can assure you that I found it yesterday when I came out of Mass there was such a strange glow in her eyes that when I passed by her side I had to sanctify myself from the fear that it produced, and it also left a very strange perfume, commented a certain waiter as well.

– Superstitions all! -exclaimed a young man who had heard everything. They are beautiful eyes, and nothing more… People like to talk a lot.

Having heard all this, and already with the comforting warmth of the wine in his stomach, Don Pedro decides to participate in the conversation, in a humorous tone because he believed little in these superstitions:

On the way to his house, in the Córdova alley, Don Pedro remains restless about everything that happened in the Mesón del Sevillano, and intrigued by the lady’s eyes. When he arrived, a servant gave him a letter that had reached his name shortly before, in which he saw the name of Doña Luz written in fine print. A shiver ran through her body, and opening the letter she was able to read:

” If you are as brave as you are curious, and as determined as you are arrogant, I am waiting for you at eleven o’clock in front of the door that faces the river of the church of San Sebastian; if you come I will decipher the mystery of my eyes” .

That missive disturbed him greatly. How had I found him, Doña Luz? How did I know his curiosity? 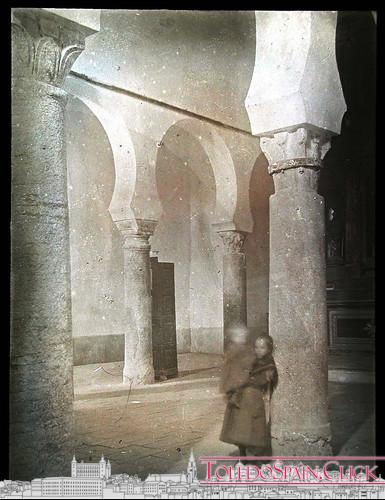 Church of San Sebastián at the beginning of the 20th century. Photo Linares. Source: Toledo Forgotten on Flickr.com