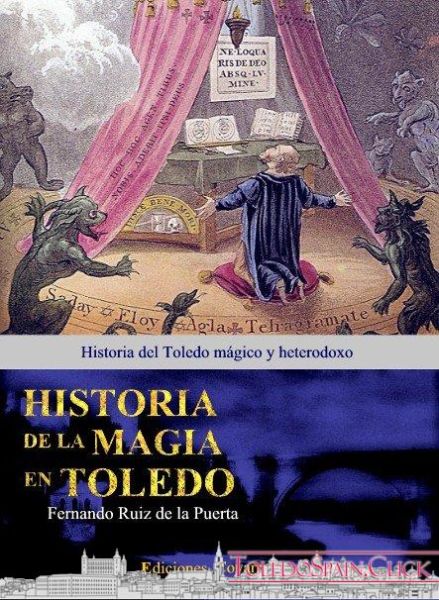 Ediciones Covarrubias, in its collection Arcanum brings us by the hand of Professor Fernando Ruiz de la Puerta ” Historia de la Magia en Toledo” , an extensive research in the form of a pocket book of more than 200 pages on a magical world that began in the carpetana era…

This work is a study of the history of magic in the city of Toledo; a magical world that began in the Carpetan era and continued into the Roman, Visigoth, Arab and Christian centuries covering the period between 1100-1600 AD. An exhaustive study is made of Arab medicine, the world of alchemy, Kabbalah, astrology, ars notorious, talismanic magic, physiognomics and, above all, necromancy, the magical art of Toledo par excellence. It also includes biographical reviews of important Toledan magicians such as Miguel Scoto, the Marquis of Villena and Gerberto, among others.

The author has not forgotten the commentary to magical books as important as the Toledo Picatrix and to the most relevant medieval magical texts that had this singular book as their source. Thus, the author trusts that the reader will enjoy reading it as much as he suffered writing it, due to the exhaustive research he has had to do.

The author, in more than 200 pages, tells the story of magicians, sorceresses, astrologers…, from the beginnings of the city of Toledo to the 16th century. A research work that the author himself acknowledges began decades ago, interspersed with other well-known publications that have become classics and ” best sellers” in the city of Toledo, such as ” The Cave of Hercules and the Enchanted Palace of Toledo” , not long ago republished. The book devotes an extensive chapter to the ” Toledo School of Necromancy” , and to the influence of the magic arts in Toledo until the 16th century, a century in which the decline of magic in the city began mainly due to the terrible influence of the Inquisition.

The book contains different illustrations and photographs, in some cases taken by the author himself.