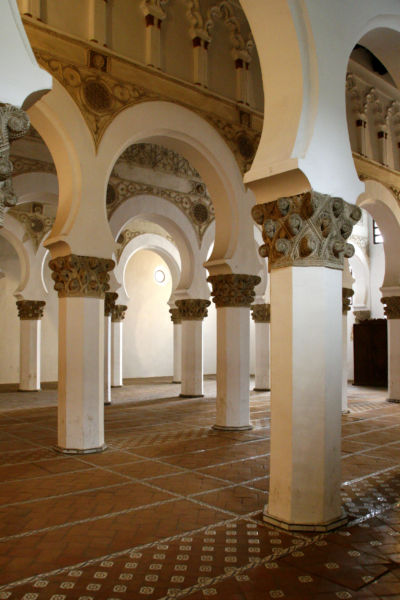 Santa María la Blanca Synagogue in Toledo ” Santa María la Blanca” is not a common name for a Synagogue… Toledo has stood out for centuries for the ” coexistence” of cultures that has modified on many occasions the features of names and places originally with a very different destiny than the present one.

The synagogue of Santa María la Blanca is one of the oldest monuments in Toledo along with the mosque of Cristo de la Luz and the Roman and Visigoth remains.

It was ordered to be built by the Jews who lived in the neighbourhood called ” La Judería” at the beginning of the 12th century (according to the visible inscription on one of its beams).

With transitional Arab architecture, that is, from the second stage of Saracen art, at first glance it looks like a mosque, but when we go inside we can clearly see that it is a synagogue. Nothing makes us think that behind the simple walls or gardens that enclose this monument, we can find a jewel like this and that is how the Arab proverb is fulfilled that ” all the beauty inside” .

This is one of the ten synagogues that came to be in Toledo, but after the anti-Semitic revolt of June 20, 1391 were reduced to disappear virtually after the expulsion of the Jews in 1492. Also standing is the Transit, which is another of the wonders we can see in Toledo.

This Synagogue was the largest of the Jewish quarter of Toledo, erected, according to an inscription carved in a fragment of a beam, in the year ” four thousand nine hundred and forty” (1180 A.D.).

Some authors point out that almost certainly the synagogue was erected by Muslim stonemasons who gave it its imprint in the time when Toledo was already a Christian city some time ago.

According to a famous elegy dedicated by Ya’aqob Albeneh to the assault suffered by the Jews in 1391:

” Woe to the ruined synagogues, where vultures and kites have nested, for the children of Israel have departed.

The greatest synagogue hastened into misfortune; it utters the wailing voice, the synagogue of Israel. Its gates lie desolate, for the mobs, Muslims, and Christians who wiped out the children of Israel from there, penetrated them! (Ya’aqob Albeneh)

Inside the Synagogue of Santa María la Blanca in Toledo.

At the end of the 14th century there were ten synagogues in Toledo , and five study and prayer centres or madrisas, to which perhaps two more should be added, of which there is documentary news.

Of these ten, a good part disappeared in 1391, and only the New Temple or New Synagogue, which would be what is now called Holy Mary the White, has been identified with certainty.

For years it provided religious services to the large Jewish community that lived in this area of Toledo, protected by its own walls and sturdy gates that separated it from the rest of the inhabitants of the city.

There are also two versions of its origins: according to one of them was built in the reign of Alfonso VIII by Ibrahim ben Aljafar, ambassador of Castile to the Almohad court; according to another, based on the architectural influence of Granada art, the synagogue would not be fully erected until the end of the thirteenth century.

Its architecture stands out for its Mudejar style and the sobriety of the exterior and the richness of the interior decorative elements, like so many other palaces and monuments in Toledo.

The visitor would be very surprised at what is hidden behind numerous brick, stone and adobe walls in Toledo. Jews and Muslims enacted laws aimed at diminishing the grandeur of the exterior, thus limiting its height and ornamentation. Thus, unlike churches and mosques, synagogues lack bell towers and minarets.

The synagogue consists of five naves, built from east to west, separated by horseshoe arches on octagonal pillars. The central nave is the highest, following a basilical archetype. In total there are 32 pilasters, with capitals adorned with scrolls, rhombuses and stems with pine cones. 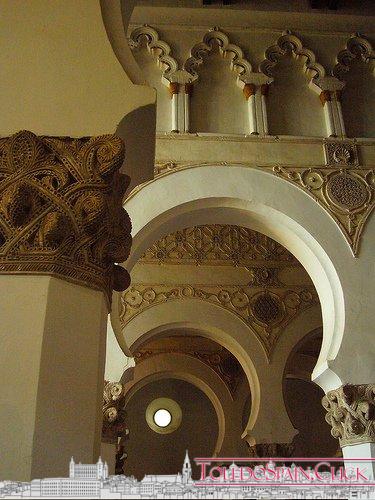 It was in 1411 when San Vicente Ferrer preached in Toledo. The pulpit from which Saint Vincent preached his sermons is still preserved today in the church near the Bisagra gate of Santiago del Arrabal, and he encouraged an exalted crowd to tear down the doors of Toledo’s Jewish quarter, devastating it and imposing Christian worship on this major synagogue, which from then on would be known as the ” Church of Santa María la Blanca” .

In some of the pogroms (especially that of 1391) through which this Jewish quarter passed, the most purely liturgical ornamentation was destroyed, leaving only a few decorative elements.

In 1550, after introducing some reforms, Cardinal Silicon created a beaterium to collect repentant public women. In this century, Alonso de Covarrubias, at the request of Cardinal Silíceo, reformed the headrests, creating three chapels, the central one covered with a half orange vault on tubes while the lateral ones are of quarter sphere on pendentives (Plateresque style). The altarpiece is by Nicolás Vergara El Viejo, made in the second half of the 16th century.

In the 18th century, the building was converted into a militia barracks, and its recovery as an artistic monument began in the middle of the 19th century. After the Spanish Civil War, a royal decree from the government handed over Santa María la Blanca to the Catholic Church.

We extend this information with the following article by Carlos Dueñas Rey about the Synagogue:

How many synagogues there are in it of incomparable beauty! There the whole soul praises the Lord!

Santa María la Blanca is structured by a basilica floor with five white naves, well differentiated by the separation of numerous horseshoe arches resting on octagonal pillars with capitals of pineapple figures that give the entire synagogue an oriental character that takes us to past times and evokes the glorious past of the city of Toledo and its important Jewish quarter.

The decoration is quite profuse and here a true explosion of ribbons, flowers with scallops, medallions, stars and lilies² very intertwined with each other, let contemplate a precious harmony and almost perfect, difficult to forget.

Inside the Synagogue of Santa María la Blanca in Toledo.

It was not spared in work or economic efforts and everything was paid at the expense of rich and powerful Jews who were close to the court, although it is doubted who could be the main promoter, are shuffled the names of Joseph ben Susan (almojarife of King Henry VIII) or Abraham ibn Alfechar, who was also advisor to King Henry and could also be David ben Solomon, who was tax collector of King Sancho IV.

Torres Balbas tells us that this synagogue is the clearest example of Almohad art on the peninsula.

Also noteworthy are the larch wood roofs of the well-known ” row pair” in the side naves and ” pair and knuckle” in the party walls and in the center.

Column in the Synagogue of Santa María la Blanca in Toledo.

It was a synagogue until the middle of the 15th century when, through the preaching of Saint Vincent Ferrer, it became a Christian church of the Order of Calatrava and dedicated to Saint Mary the White. In 1550, Cardinal Silíceo converted it into a shelter or beaterio for repentant women, joining other adjoining houses to the enclosure.

The well-known master Covarrubias was in charge of an important reform of the whole complex and the altarpiece of the new converted church is attributed to Berruguete or Juan de Borgoña.

In the 18th century the synagogue was used as a barracks for the soldiers of the Toledo garrison. From this period date the caves and tombs found in the sixteenth century as well as the remains of old buildings very prior to the synagogue.

Towards the middle of the 19th century Santa María la Blanca was declared a National Monument and in this way has no cult, neither Jewish nor Christian.

But it is used as a unique and spectacular space for concerts or other types of activities, being its administration in charge of the archbishopric of Toledo. Recently a magnificent artistic lighting allows us to enjoy a different way of this singular monument and you can see details that until now had remained hidden.