Not long ago, in one of the many guided tours we do around the city, a tourist asked us an interesting question: what is the narrowest street in Toledo?

We know many small alleys in Toledo. Not in vain Toledo, given its urban layout, inserted in a relatively small promontory surrounded by the river Tagus and heir to past centuries of Muslim domination and multiple vicissitudes in the urban definition, has a labyrinthine street map, with high stone walls that prevents the passage of the sun in numerous streets and creates nooks and crannies where not infrequently ambushed in past times to commit various misdeeds…

I do not know if anyone has done the following to date: first, ask in our Facebook group dedicated to Toledo if they knew which is the narrowest street in Toledo (there are almost 24,000 people participating) and second, to check the validity of the survey, our good friend and web collaborator Carlos Dueñas Rey , metro in hand, has gone to the alleys that we thought were smaller to measure which is the narrowest.

The results are (we take advantage to put some curiosity of the alley and geolocalize them in GoogleMaps, so you can find them):

Callejón sin salida de la Soledad, in Calle de Santo Tomé. In fact, it is a small adarve, ” probably the narrowest of all those in Toledo” and which begins in Calle Santo Tomé, Julio Porres already pointed out in his History of the streets of Toledo. And so it is, with a minimum measure in the narrowest part of 0.86 cm. In 1561 this alley was called Maese Juan, giving access to several houses, although it already existed well before this date. If you don’t look closely, this small alley goes unnoticed because of the importance and the striking nature of Calle de Santo Tomé.

In the district of Montichel, where tradition places the legend ” The day of the moat” a narrow alley surprises us joining the walk of San Cristóbal with the Crossing of San Torcuato. For only three centimetres this alley is not the narrowest in Toledo.

In third position is the alley that joins Ave María Street with the square where the School of Translators is located. As a curiosity, indicate that it was named until 1718 ” of the Bad Name ” , although the reason is not known. Porres says that ” we are not surprised about the Bad Name if we remember that it was exercised activities non sanctas ” .

Between Plaza de San Justo and Calle del Lócum. There is no exact certainty as to the name of this narrow alley. Popular tradition indicates that a bull escaped from nearby corrals and got stuck here, hence the name; although it is more probable according to Porres that it is due to the surname of some person of relative fame or rooted in this place.

A nocturnal guided visit in the Callejón del Toro, by RutasdeToledo.es

On other occasions we have made reference to this curious toponym of Toledo, so we won’t go on long, inviting you to read entries such as ” El Callejón del Infierno” or ” El Diablo y Toledo” . At present, this small alley has a fence that prevents the passage of non-residents, we believe by the ” jaleo” caused by the many who came there attracted by such a curious name.

It joins Nuncio Viejo Street with the Plaza del Padre Juan de Mariana, probably the longest adarve in Toledo. As curiosities, it is an alley with a shed, one of the few that remain in Toledo and in its access can be observed one of those plates by which so many ask in which it reads ” This street is from Toledo ” , being an attempt of the municipality to avoid that the neighbors easily appropriate public ground when modifying the layout of these so small streets, turning the space into part of their houses. Because of this plaque, the alley was known for a time as ” de Toledo” . In 1864, to avoid coincidences in the name, it was titled ” de los Orates” , although few have used it since then.

There are many more narrow, labyrinthine alleys in Toledo in which it is worth missing a summer night (or a winter afternoon, when the fog goes down), but we leave it to the reader’s imagination and desire to discover them. We could mention the alley behind San Vicente (Círculo del Arte), the small adarve hidden behind a door in Plaza Abdón de Paz, Travesía de San Marcos, el callejón del Gordo, el Callejón de los Muertos (behind San Lorenzo), el callejón del Codo, el callejón de los Siete Abujeros…

You can see the survey we did in the Facebook group at this link: What is the narrowest street or alley in Toledo?And join the group if you like what we share there.

Sometimes we can also be surprised… Do you know a narrower alley in Toledo? We invite you to share it in the comments or in the Facebook group.

Acknowledgements: Carlos Dueñas Rey (measurement of the alleyways on 9/1/18), Toledospain (photos) and participants in the survey of the Facebook group ” Legends of Toledo” .

Note: the measurement was made at the narrowest part of each alley.

CMMedia’s program ” Ancha es Castilla-La Mancha” was interested in this article and we recorded the following video:

Article about our publication: Discover the six narrowest alleys of Toledo, from the Jewish Quarter to the Cathedral (EnCastillaLaMancha.es)

On Friday, January 12, 2018, Juncal Roldán interviewed us on Cadena Ser about this article (see link) 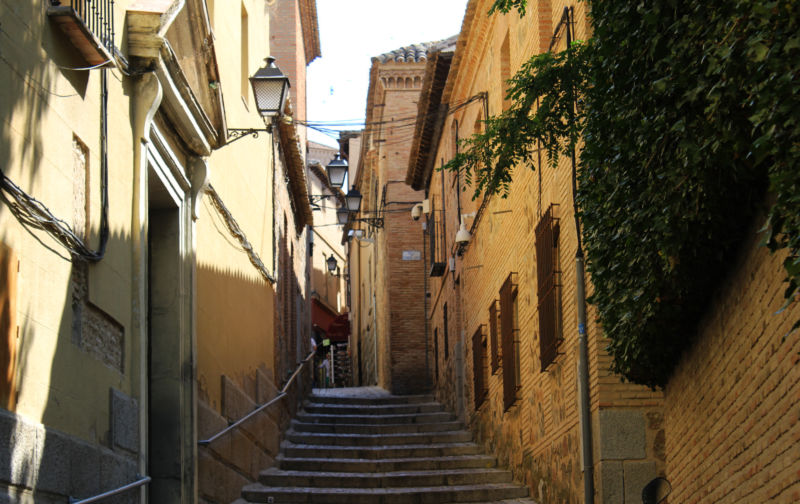