We continue with this singular series of articles dedicated to some of the curiosities that Toledo contains. On topics as diverse as swords, braziers, suburbs, Mozarabs, hospitals, cleaning and ” Tuesday” , try this article.

In the today known as ” Paseo del Circo Romano” (Roman Circus Promenade), because this is the area where such a great construction was built, and which today houses a spacious garden area due to the huge number of archaeological remains (many of them still hidden) under the current level of the land, the inquisitorial ” brazier” was built. This place received the name of ” campo del Brasero” (field of the brazier) because from 1576 to 1813, in very close proximity to this area, the sadly brazier of the Vega was built, whose purpose was the burning of heretics in a public and atrocious way.

The Templaza of the Toledan Sword 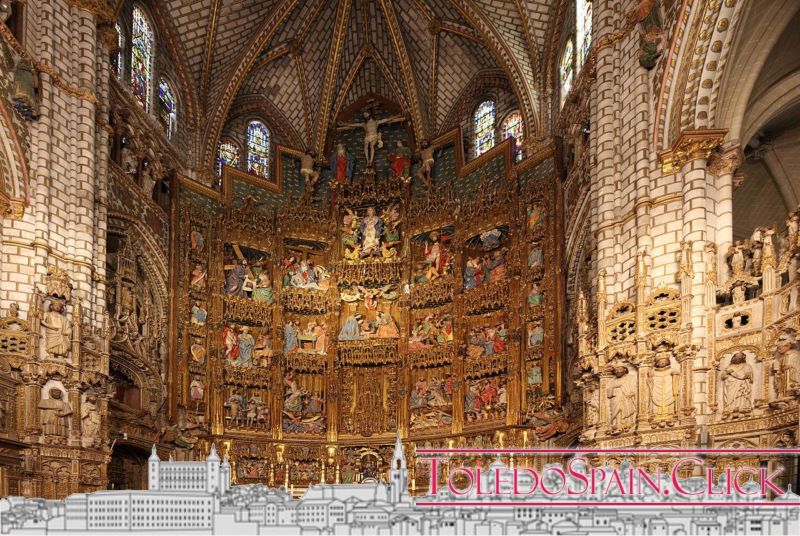 It is a tradition in the city to believe that the ancient Toledan gunsmiths preferred to temper the swords on dark nights, because they could distinguish exactly the hot spots marked on the iron, and the ripe cherry red, light and pink, essential before submerging the leaves in the warm water, measuring the time of the mentioned immersion and tempering in the absence of clocks reciting prayers, traditional phrases and mysterious formulas, of a certain duration.

” Blessed is the hour in which God was born;

Santa Maria who gave birth to him;

St. John who baptized him;

good tempera we will do

if God wills it.”

It is also said that these forgeers of the famous Toledo sword, tempered in the waters of the Tagus that, according to many, has (or had) properties that made Toledo steel the best in the world.

There were up to 30 hospitals in Toledo

There were up to thirty hospitals in the city, although not all were dedicated to the care of the sick, but also to providing shelter for beggars, orphans, the poor… Curious were those who housed maidens and others who indoctrinated ” errant” women.

There were eleven dedicated to health care… Probably the oldest was the hospital of Santiago, given that its foundation dates from 1175, being this war hospital belonging to the Order of Santiago until the end of the reconquest.

Perhaps one of the best known is the hospital of the Nuncio (also of the Visitation or of Innocents), which owes its name to its creator, the Apostolic Nuncio of His Holiness, Don Francisco Ortiz, consecrated since its creation in 1483 to the mentally ill, being one of the first in the whole world to dedicate themselves to this task. This hospital houses within its walls some of the most curious anecdotes of the city, such as the ” pendency” that cost Garcilaso de la Vega the exile, or as a place where some of its characters are located some of the best known authors of the time, such as Tirso, Valdivieso or Quirós.

The liturgy of the Spanish Church, called Mozarabic, Toledan or Isidorian, has peculiar features, although it includes Ambrosian, Byzantine and monastic elements. The Mozarabic Mass, as it is preserved, is composed of three parts: Artemis, the Mass of the catechumens and the Mass of the faithful. It is characterized by the active intervention of the people, led by the deacon. The sacraments of initiation (baptism, confirmation and eucharist) have unique characteristics. Before baptism there is a period of preparation, ” the catechumenate,” which was announced about twenty days before Easter. Confirmation had two rites: anointing and laying on of hands. The Eucharist was administered with the two species, bread and wine. There was secret and public penance; this was imposed on serious sins. The sacrament of marriage was celebrated on a Sunday and the day before the blessing of the thalamus. There were also a series of rites about the ordination of priests and abbots, the royal anointing and others. There was even a rite of farewell to the king when he departed for war. The funeral liturgy is remarkable for its theological sense and drama (Felipe Torroba Bernaldo de Quirós)

The Toledans thus call the weekly market that since 1950 every Tuesday was held in Zocodover, then in the Paseo del Carmen and lately in the Paseo de la Vega. From the ” Tuesday” of before (50 or 60 years ago) to today there is very little difference in what is traded. However, it has been a long time since the cattle market disappeared from the Plaza de la Concepción. But this type of open-air market is not only typical of today. Since the Muslim invasion, Toledo, like many other cities, depended largely on this type of markets and fairs. Some curious note from this market tells us that on Saturday of Glory, paschal lambs were sold in Zocodover. Many parents bought them so that their children could take them out to pasture in the Vega Baja or the hills of the Valley.

I’m sure you’re also interested: The sword that slit the throat of Saint Paul disappeared in Toledo.

Also the municipal ordinances provided for cleanliness, so that no one ” threw dung or other dirt or garbage on the streets,” under a fine of 12 maravedíes. It was ruled that no one should throw debris into the street during house repairs, and if he did, that he should put it up against his wall. In addition, within eight days he should be removed from the city under a fine of 72 maravedíes. 12 maravedíes more of fine would cost to leave a dead animal in the streets, and other 12 to those neighbors that did not clean of manure the streets at the request of the City council.

We could say that Toledo was one of the ” cleanest cities” at that time, because when in many other neighbors threw their sewage and waste into the street without any regard, in Toledo still worked the sewers that had built the Romans, and today serve as a tourist attraction.

The suburbs are characteristic neighborhoods of Islamic cities, which arise as a result of the growth of the same outside the main walls. They enjoy a certain autonomy, with their own mosques, baths and markets. The suburb of Toledo arose with the Muslim conquest, in the northern part of it, and very close to the old Roman road that led to Zaragoza, consisting of two neighborhoods, ” Antequeruela” to the east and ” Santiago” to the west.