The Alcázar toledano, which rises on the highest hill dominating the city, has its origin in a Muslim fortress that served as residence to the governors of Toledo, among them the already mentioned in some other legend ” Al-Mamun” , who had a daughter called Casilda… 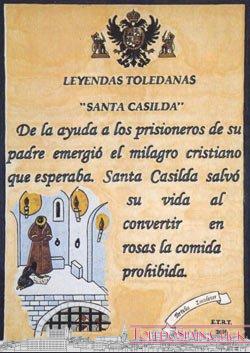 Ceramic plaque of the legend of Santa Casilda in Toledo

The Alcázar toledano, which stands on the highest hill dominating the city, has its origin in a Muslim fortress that served as a residence for the governors of Toledo, among them the one already mentioned in some other legend ” Al-Mamun” , who had a daughter named Casilda.

Every night, when everything slept or seemed to sleep in the castle, Casilda got up from her bed and, ajarly opening the door and the windows of her room, the girl listened to the moans and groans that went up to her from the moat. Since she was a child, she had shown great sensitivity to the misfortunes of others, and moving through the fortress, she had discovered the harshness of the prison and the tragic fate of the captives, mostly Christians captured in the harsh border fights of the Moorish kingdom. In his visits to the dungeons of the fortress, he did not hesitate to heal the wounds of the prisoners, bring them food and console them, while he spoke with them and was aroused a certain curiosity for that religion to which these men did not renounce despite their hardships.

Soon his father heard that attitude, much criticized by the Arab nobles, and very angry, trying to prove his daughter’s innocence, he asked to be warned the next time she visited the dungeons. One day when Casilda was approaching the cellars of the fortress hiding food in her apron, her father came out and asked her what she was doing there and what she was hiding in the apron.

Insurance that you are also interested: The hand of the Devil. A legend from Toledo

At first the girl was very frightened, but she quickly recovered her serenity and replied that they were only flowers to brighten up those rooms a little. His father demanded that he open his apron and Casilda did so, and a large bouquet of roses appeared on his lap.

The mishap did not pass from there, but the girl, very impressed by that portentous fact, began to think about conversion to Christianity, but soon began to suffer heavy bleeding that was deteriorating. The doctors of the court did not know how to find a remedy for her pains and as a last resort to save her life, she was advised to go to the waters of the lake of S. Vicente, near the town of Briviesca, in the middle of the kingdom of Castile.

Naturally, the Muslim king did not like to send his daughter to Christian lands, but before the doctors’ ultimatum, he gave permission to Casilda to undertake the journey. At her destination she was well received by the Christians and soon the baths took effect and the girl was healed.

Recovered, Casilda decided not to return to Toledo and to remain in those lands completely dedicated to prayer. And they say that in those places she built a hermitage with her own hands, where she was buried, after dying at an advanced age. The miracle of Saint Casilda (by Zacarias Gonzalez, 1820) The miracle of Saint Casilda, by José Nogales. (Source: Wikipedia)