On the current Paseo de San Cristóbal, one of the darkest and bloodiest episodes in Toledan history took place, what is known as ” Una noche toledana” (O ” La Jornada del Foso” )

In what used to be the neighbourhood known as ” Montichel” , because it is one of the seven hills on which Toledo sits, in the current Paseo de San Cristóbal, one of the darkest and bloodiest episodes in the history of Toledo took place, what is known as ” Una noche toledana” (A night in Toledo).

Tolaitola was ruled by a young man called Jusuf-ben-Amru, a despot and cruel to all Toledans, who committed many misdeeds under his power: he kidnapped maidens and killed all those who opposed his terrible methods.

So much was the popular discontent that an uprising was not long in coming and the Toledans took the city. A commission of nobles warned the young governor of the danger of the situation, but he, ignoring the wise advice, continued to try to defend the city, sending his personal guard and trying to crush the uprising in his city. Seeing the nobles that Jusuf was little protected, they decided to capture him. The people asked for the head of the young man and he was executed.

The nobles sent news to the Caliph of the situation Toledo had lived under Jusuf and of recent events. The Caliph summoned his faithful servant, Jusuf’s father at the time, and told him the sad ending of his son. Amru, father of the executed governor, asked the Caliph to be sent as the new governor to Toledo as payment for his favors, so that, by governing correctly, he could correct his son’s errors and regain the honor lost by his family.

Insurance that you are also interested: Photographs of Toledo 100 years ago and today

The Caliph trusted Amru’s word, and he left for Toledo. The Toledans greeted him with fear and suspicion, knowing well that he was the father of the governor they had asked to be executed.

His fears were unfounded, as Amru ruled paternal and nobly before the aristocracy. He listened to his subjects and respected their opinions.

But Amru was proud and concealed his true intentions. He needed to gain the trust of those who murdered his son. The occasion for his revenge presented itself on a good day when the son of the Caliph made a stop in Toledo on his way to Zaragoza. Amru entertained his guest with a great banquet to which he previously invited all the city’s principals. The agape was prepared in a residence that the governor had built in the current area of San Cristóbal, since he never wanted to live in the Alcázar Toledano, due to the nefarious memories that it brought him. 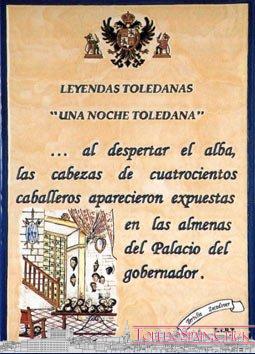 A night in Toledo

The nobles of Toledo prepared in their best clothes to go to the banquet in honor of the future caliph prepared by the governor. The narrow streets of Toledo, barely illuminated by torches, saw the procession of all of them accompanied by servants and women.

As they entered the residence, the governor’s personal guard, many of whom had faithfully served their son, accompanied the guests to a secluded place where sharp alfanjes cut their heads and their bodies were dragged to a subway.

Legend has it that when Amru, father of Jusuf and faithful servant of the Caliph, saw the last head fall, he exclaimed:

” My son, you can rest in peace, for you are already avenged!”

With the arrival of dawn, the Toledans were able to contemplate with all their horror the spectacle that had taken place in the governor’s residence. Hundreds of bodies and heads were piled with a rictus of terror in the courtyard, while those of some, the most important, hung like banners from the palace’s battlements.

A ” toledana night” means, still today, for many Spanish speakers, a night of terror, unbearable, that instills fear in the soul…

* Text based on Gamarra, Pablo;

Click on this link to place the Legend in Googlemaps.