Among the thousands of people who visit these pages on a daily basis, we sometimes receive messages from Toledanos like Juan Álvarez who send us incredible stories and unpublished legends like the one we are now transcribing for you. Juan tells us that his grandfather told them to him when he was a child, and now he has the enormous kindness to lend us those memories, which would otherwise be lost, for the enjoyment of those who come to these pages. Thank you, Juan. Let’s go there with ” The gaze of Christ ” , a new legend from Toledo.

As you know, legends have traditionally been transmitted orally, from parents to children, which has allowed the city of Toledo to preserve hundreds of them (in ” Visitas Guiadas Toledo” we have already registered more than 300 legends in the city of Toledo alone). Next we share the legend that Juan Álvarez has sent us (thank you), without forgetting to recommend that the best way to listen to these legends is in the original locations where they happened in the streets of Toledo, which still exist because Toledo practically does not change. In Travel Websites such as Destinia you will find important offers to get to Toledo, hotels, flights, etc..

In many corners of Toledo you will find wooden crosses… Like any alley, monument, – some even say – every stone, has its legend in this city. The new one we present today narrates why these crosses, for the most part, do not have a Christ:

The night became eternal to me (and in summer they don’t last long). The first stories I had been reading that night were of Christs… “” The Christ of the Skull” , ” The Christ of the Knives” (when I had just started ” The Christ of the Waters” I fell asleep) so, when I woke up, I jumped out of bed and, I remember, shouting my grandfather’s name all over the house.

– Don’t worry, first you’re going to have some breakfast to gain strength, the morning is going to be very long until lunchtime. By the way, what were you reading last night?

– Oh, Grandpa! A very beautiful legend of some swordsmen who are going to fight in mourning by the light of a candle that illuminated a Christ and that every time they hit their swords, the candle went out….

– Ah! Ya, Christ of the Skull by Gustavo Adolfo Bécquer

– And another story – this time it was I who interrupted my grandfather – also of duels, swordsmen and a wall of a church that opens. Ah! and what was written in verse!

– Well, I think it’s great, Grandpa. I already had breakfast. Let’s go out into the street looking for adventures.

– Let’s go out then. Mary,” he said to my grandmother, ” don’t wait for us until lunchtime.

We began to walk through the streets of Toledo which, thank God for its narrowness! allowed us to walk at ease among the shadows of its old houses, mansions, churches, convents…, the day ventured frankly hot.

– Have you noticed, Juanito, that on the walls of many streets in Toledo, there are wooden crosses? 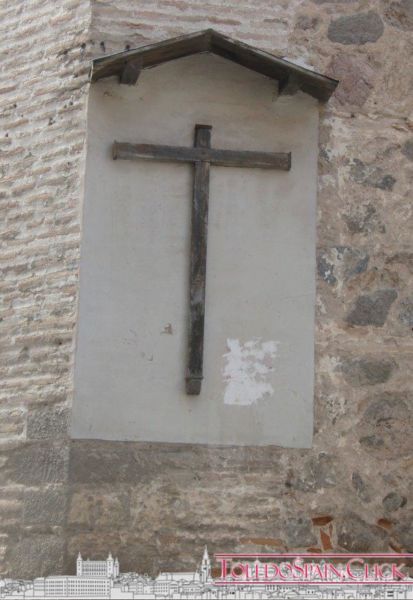 – These crosses are usually on the outside of the apses of some churches or convents to remind us that, behind those walls, there is a sacred place, almost always an altar or a chapel dedicated to the most holy, other crosses are placed in places where there was supposed to have been some miraculous event…, but well, what I’m telling you deviates a little from the true story I want to tell you, in those crosses… don’t you notice anything strange, Juanito?
.
– Well, the truth… grandfather… I don’t know what to tell you – I doubted, I didn’t want to offend my grandfather with a silly answer, and in the end, that’s what I did – What are very old and dirty?

I’m sure you’re also interested: The Lady with the Dull Eyes

– No man, no. What are all the crosses missing that, for now, we’ve seen?

– Exactly! -Well, the story I’m going to tell you today alludes to why there aren’t images of Jesus in those crosses.

– Start Grandpa, this story promises to be interesting. And what is it about? Of adventures, of mystery…

– Jo! What a rust! But, anyway, grandpa starts.

” Many, many years ago, a corregidor lived in Toledo…

– The king’s representative in the village, like the mayor now. But don’t interrupt me any more until I finish with the story because otherwise, knowing you, it’s going to go on forever,” said my grandfather in a slightly grumpy tone, ”

Well, as I told you, there lived in Toledo a greedy, casquivano and womanizer corregidor who, taking refuge in his high office, did what he wanted. His life was so vicious and crazy that he did not notice what he was doing and his evil filled the good inhabitants of Toledo with fear.

For many complaints that came to the king, he was only concerned about their wars in Europe and pay the expenses that they caused and, as the aforementioned corregidor, in addition to being of noble lineage and high cradle, contributed to the royal coffers his good money …. because the king ignored the complaints he received about the perfidious corregidor.

The evil character was, secretly, in love with a Toledo maiden, Doña Leonor de Acuña from a noble family that had come to less and much younger than him. Don Lope, who was so called the infamous corregidor, pretended to doña Leonor with dark and ignoble desires because, although he promised to marry her, his real intention was to possess and defile the young maiden and then abandon her.

Taking advantage of the hardships and shortages of the Acuña family, Don Lope spoke again and again with Don Hernando de Acuña, Doña Leonor’s father. He promised him everything: money, land, power and, above all, to recover the prestige of his surname lost by his family. But Don Hernando, who was above all a man of honour, defended the honour of his daughter above all luxury and promised power because, deep down, he knew the intentions of the evil corregidor.

Since Don Lope did not achieve his purposes with flattery or threats, he came to the conclusion that if he wanted to achieve the purity of Doña Leonor, he would have to kidnap her.

Knowing the corregidor’s intentions, doña Leonor, advised by her parents, took the habits of a novice to embrace religion in one of the numerous convents of Toledo.

– Oh, boy! That doesn’t matter… well, in the nuns’ Convent of St. Dominic. And don’t keep interrupting,” said my grandfather a little upset

Anyway, the evil corregidor was not very satisfied with the decision of Leonor and his parents, the walls of a convent were not going to stop his evil intentions to make the young novice his own so, one night, full moon (although with very black clouds), Don Lope and his henchmen reached the doors of the convent. With tricks and lies they deceived the nun porter and went to the chapel where the nuns and novices were in prayer.

They entered, as the common saying goes, by sack. With their swords drawn, they gave straps left and right, pulling kneelers, benches… making the other nuns and novices flee from the chapel.

– Go on, Grandpa! Don’t stop now,” I almost begged my grandfather;
– Well, well,” said my grandfather in a sly voice, ” you seem to be interested in this story;
– Of course grandfather… It’s very interesting! Now it was you who interrupted her!
– It was to get your attention and, above all, to see your reaction. I continue.

It happened that the face of the Christ who was behind Leonor, with his eyes closed because the image represented a lying Christ no longer alive… He opened his eyes! And with an inquisitive look he nailed them in the eyes of Don Lope who could not sustain that serene and divine look of the crucified.

Don Lope ran scared out of the convent just as it started raining. A storm discharged on the streets of Toledo.

But the story doesn’t end there…, in his flight to his noble mansion (which, by the way, was quite far from the convent), wet and deep to the bone, Don Lope managed to pass through one of the many sheds that were in our city at that time. He paused for a moment to take a breath and, at the same time, shake off his wet clothes with his wide-brimmed hat and goose feather. At that moment, Don Lope noticed that, in the middle of the shed, there was a large cross with a Christ nailed to it. With more fear than shame, with much fear but with great curiosity, Don Lope felt that his steps, almost unintentionally, were going to the feet of Christ… and then the miracle happened again. As in the convent, the Christ who lay with his eyes closed, opened them all at once and, once again, his inquisitive gaze fixed itself on Don Lope’s eyes. Needless to say, the wicked corregidor ran out of the shed, no matter how much more the rain came each time.

Don Lope continued to run through the narrow streets of Toledo like a soul carried by the devil and, from time to time, a flash of lightning illuminated his passage through another cross nailed to the wall where the same story occurred: Christ opened his eyes and a

It was impossible for Don Lope to hold that gaze. And so with one, two, three…, with all the Christs he crossed until he reached his house.

The next morning. And in the face of the opposition of the clergy and of every good Toledan, Don Lope ordered his bailiffs to remove all the Christs from their crosses and keep them in a safe place where no one could find them and recover them.

– Oh, Grandpa! How badly the story ends!
– Yes, Juanito. The Christs could not recover and, therefore, still today, the crosses are naked, but, the story ends worse for Don Lope….