Skip to Content
Home Toledan Curiosities Of droughts, great snowfalls and a certain bearded woman in Toledo in 1561 (Curiosities of Toledo, fifth part)

The well-known historian Sebastián de Horozco [1] has left us multiple news and stories of 16th century Toledo that he knew and kicked like nobody else. That century still holds many anecdotes and curiosities about Toledo like the ones we bring to these lines today.

Did Toledo cease to be capital because of the snow?

It seems that the year 1561 started with a heavy snowfall that paralyzed the city of Toledo, because according to the chronicler fell so much snow that ” the living did not remember to see another such” . Coincidentally in those moments the court of Felipe II remained in our city and because the streets were so dirty ” ovo so many and so damned muds that never in toledo were seen so much that the courtiers so for this as for the great tightness and lack of maintenance and bad will that they saw in the toledanos, they were very discontented in this cibdad and they wanted to go of her to another part for way that the one and the other wanted to see mudança of court and I more than all that strangely it wanted his ida” . That is to say it announced the definitive transfer of the court towards Madrid.

At that time, exactly on February 11, a girl of 11 years of Portuguese origin arrived in Toledo, accompanied by her parents, who surprised the whole city due to a particularity of her physique: She was a bearded woman. Her parents confessed that from the age of 3 years she had grown these beards, which were as populated ” as the most bearded man” . The name of this young Portuguese woman was Dominga. The chronicler says that he saw her with his own eyes in the inn of the Marquis of Falces [2], corregidor of Toledo and from there they took her to the palace (the Alcazar of Toledo) for the members of the royal family to see her as well as her ladies. It is said in the text that they were ” two monstrosities, one being a woman with beards and the other being born so early” [3]. The corregidor of Toledo gave permission to the parents of the young woman so that they could show her to those who wanted to see her. We cannot forget that she is not the only bearded woman who has passed through Toledo because fortunately our city conserves in the Hospital Tavera, belonging to the Ducal House Foundation of Medinaceli the painting ” The bearded woman” by José de Ribera, which represents the Italian Magdalena Ventura with a child in her arms.

You may also be interested in: La Dama de los ojos sin brillo 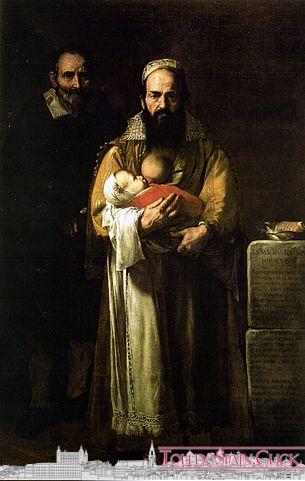 Other curious events occurred that same year in Toledo. For example, an auto de Fe took place, that is, those trials in which the Holy Office sentenced the heretics it had arrested for such diverse issues as Lutheranism, the practice of witchcraft, bigamy or blasphemy. In the car of March 9, 1561, 23 men and 1 woman were sentenced, including a page of the king, of Flemish origin. Of all of them, four were relaxed or what is the same, burned. One of the four was a natural friar from Andalusia, another from Valladolid and two other foreigners, all of whom were condemned by Lutherans. After Fe’s car, four sticks were put in the Vega, in which the four prisoners were tied and then burned.

Auto de fe (probably in the Plaza de Zocodover in Toledo), dated 1656 and located in the Museo del Greco in Toledo. Ministry of Education, Culture and Sport.

Those who also swarmed around in those months of 1561 when the court was in Toledo were the thieves. The texts say that many were hanged, both by the justice of the city and by the mayors of the court and many times two by two. For example, on Friday, May 2, the mayors of the Court hung four of them together in the Zocodover pillory, ” something or seen in this cibdad by none of the living. For that reason there were every day in the pillory ” heads of men and by the quartos roads and yet never lack nor lack thieves…” . King Philip II would leave for Aranjuez on Monday 19 May 1561. 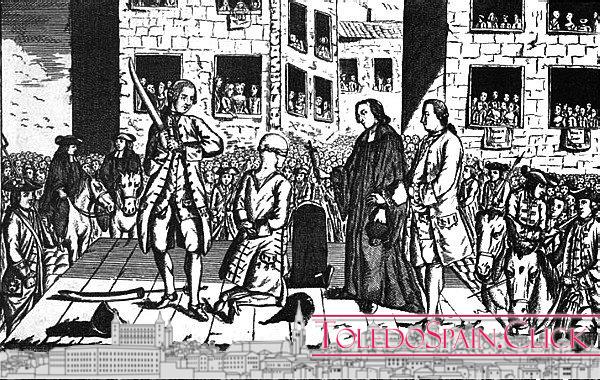 That year, moreover, was so dry that the Toledans did not remember any other like it. The Tagus was so low and so empty that you could walk anywhere. But in the annals of Toledo we find another very dry year just two years later. In 1567 different processions and prayers for rain were held during April and May. On the 1st of that month, a procession took place in which the image of the Virgin of the Tabernacle was taken to Santa Leocadia from outside (the present church of the Cristo de la Vega) and that same day, returning the procession, it rained and it was clearly seen ” to make us our lord by request of his Most Holy Mother. Blessed be she and praised” .