Did you know that one of the first bans on smoking was found in Toledo in 1779? Or that not long ago the Toledans bathed in the Tagus; what were the ” greedy Tuesdays” ? José García Cano brings us a new delivery of ” Curiosidades de Toledo” , the fourth, for the enjoyment of all lovers of the history of Toledo.

In each one of the routes of Visitas Guiadas Toledo we propose as a goal to teach, to count and to discover Toledo like nobody else. Therefore, combining the historical and Culturel richness of our city, with its most deeply-rooted traditions and customs, we write these lines that recover some news, documents and curiosities from Toledo’s most recent past and that somehow make up the recent history of a special, picturesque and captivating city such as the Imperial City.

Who doesn’t remember the stories of ” la mili” !

The fifths and those times of Military Service seem very distant, but how many of us still remember the day of the draw and the months of instruction… In the draw for fifths of 1923, held on the terrace of the City Council, was given after the act with coffee and cigars to the attendees. The streets were taken by the graceful ones who celebrated the draw. The document that we reproduce, is a passport of the commander of the city and province of Toledo giving permission of transfer to the sergeant Benito Crespo.

” …I grant free and safe passport to Benito Crespo Sargento 1º of the province to which this capital gives name, that with fifty-fifths of the same one happens to be incorporated to the Regiment of the city of Almería… 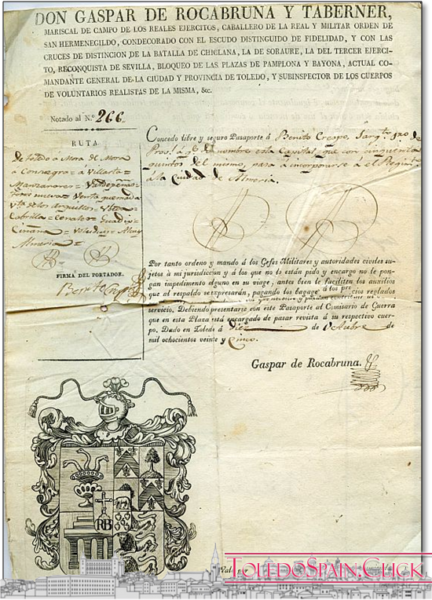 It is one of the most important economic sectors of the city and to date there are thousands and thousands of tourists who visit us every year. It is true that sometimes the coexistence of tourists and neighbors can be complicated, and the presence at certain times of hundreds of people in certain points and streets make the traffic and the day to day complicated, but the truth is that this comes from afar. In the Toledo newspaper La Idea, dated October 14, 1899, there was a piece of news that tells us about the reaction of Toledan society to the new phenomenon of tourism. Let’s read one of the paragraphs of that news:

…one of Toledo’s most important treasures is the daily influx of outsiders and foreigners, who wish to know the treasures of our city, as memories of its past greatness and splendour, honour us with their visit, in the certainty that they will be able to walk through our streets and admire the beauties that they find… And what will be their astonishment, when they step on our soil? From the moment they descend from the carriage, they are assaulted by a mob of impertinent and crude folks and ordinary monigotes, who without the slightest hint of shame, without the slightest hint of respect, persecute them, without allowing them to take notes, take photographs, fix the easels of paint, either asking them, or mocking them, or apostrophizing them, or stoning them, that up to this point has been reached, even if it causes blush when confessing it?… 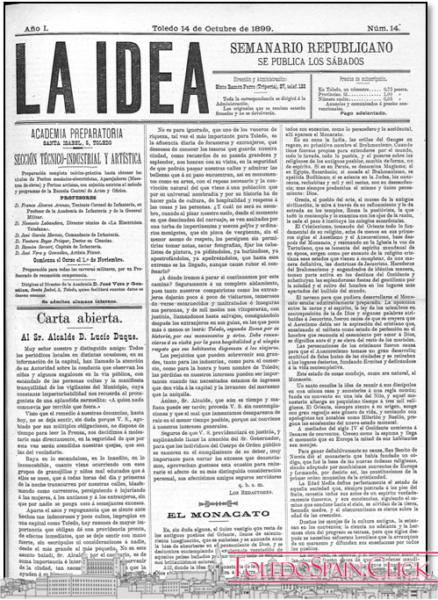 The sources of Toledo and the problem of water.

Water has been, and in part today with the Tagus river continues to be, a problem that has accompanied us throughout the centuries. For years there have been various sources for water supply in the city, although most of them are not working today (by the way, another demand that has been made for a long time by neighbors and tourists). One of these old fountains is Cabrahigos, in the Santa Bárbara neighbourhood, which we identify as a symbol of the neighbours and which reached a flow of 10,000 litres in 1902 when reforms were carried out on the same one that certainly had two pipes. Still at that time the water carriers went down to Cabrahigos to fetch water and then sell it in the city. In the press of 1904 we find a picturesque scene that we reproduce in these lines, since it represents those water carriers or azacanes loading their jars of water. But one of the first fountains that worked and solved (in part) the problem of water in the historic centre of Toledo, was the one in the Town Hall square which began to be used on March 19, 1863. The inauguration ceremony was presided over by Mayor Azcárate and the fountain was blessed by Cardinal Primate Cirilo Alameda y Brea. It seemed that it would no longer be necessary to go to the river, to distant springs on the outskirts or pay one of the azacanes that every day moved 230 horses loaded with pitchers to distribute the 33,000 liters of water for the domestic jars of the Toledo. (Source: ABC, article by Rafael del Cerro Malagón)

You may also be interested in: The signature or graphite of Gustavo Adolfo Bécquer on the cover of the convent of San Clemente in Toledo 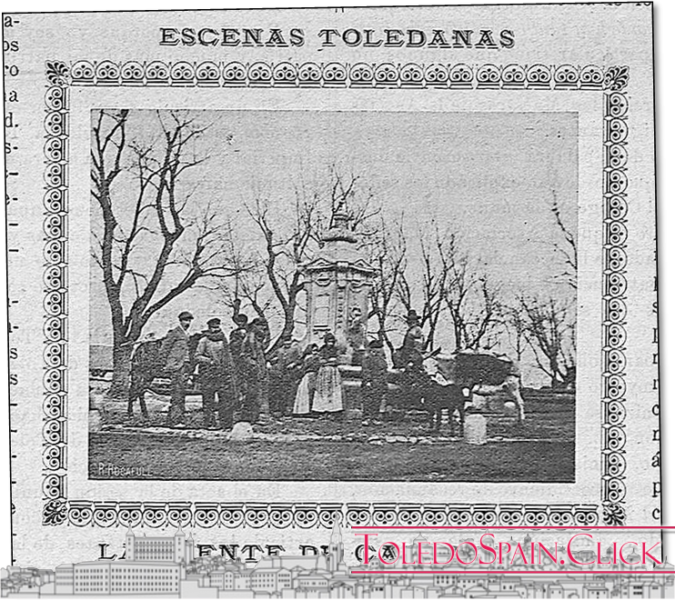 Did our grandparents bathe in the Tagus?

Many Toledans already know the answer; of course they bathed. That tradition of going to the river for a while and suffocating the heat in the water was lost years ago. Unfortunately today it is unthinkable to be able to bathe in our beloved Tagus, but decades ago it was possible to enjoy a bath with family or friends in the river. The press and the municipal councils conveniently announced the ban in 1972 due to the contamination of the river. Unfortunately, this pollution still shows the worst face of the Tagus to neighbors and visitors.