As the City Council informs, the city of Toledo will celebrate from June 2 to June 14 its most outstanding appointment of its festive calendar, the Corpus Christi , days during which the City Council of Toledo has programmed diverse cultural activities, of leisure, sports and of tourist promotion so much for the own ones as the thousands of visitors of other populations of Spain that will approach the Castilian-La Mancha capital.

The vice-mayor of Toledo, Ángel Felpeto, accompanied by the Councillor for Festivities, Carmen Jiménez, and the Councillor for Tourism, Milagros Tolón, presented this morning the programme organised on the occasion of these festivals, declared of International Tourist Interest, which, among other novelties, will bring a historical recreation of Alfonso VI’s entry into the city, on the occasion of the celebration of the ninth centenary of his death.

During these days, as Felpeto explained, different performances will take place such as a folklore festival with a parade of groups from the Plaza de Zocodover to the Town Hall, concerts of church bells at night or masses on the eve of Corpus Christi and a solemn performance with the participation of the vocal group Gran Chapel.

The Paseo de la Vega will host concerts of musical bands with the performances of the group of ” Friends of Music” and the band of Santa Maria de Benquerencia, while students of the School of Music will perform in the Plaza del Ayuntamiento.

A concert by Ana Alcaide, the performance of the Prodigious Decade and several fashion shows by the Toledo designers Félix Ramiro and José Sánchez will also take place in the Plaza del Ayuntamiento.

I’m sure you’re also interested: La Tarasca and the gigantones of Corpus Christi in Toledo. 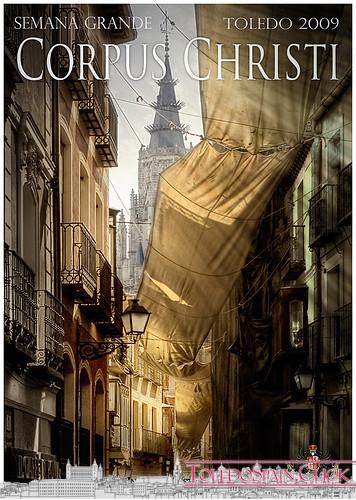 The City of Toledo, stressed for its part the Councillor for Tourism, Milagros Tolón, will consolidate guided routes and free for a total of 44 typical patios toledanos during these days, from 8 to 10 June, for all interested people.

From the same June 1, reservations can be made at the tourist information office of Toledo City Council, said the councilman, who announced that is finalizing with the Hotel Association a new tourism product for hotels and tourists in the style that was made in the Easter holidays, in order to attract more visitors to the regional capital during those days.

In this way, those interested can learn more about the processional career of Corpus Christi, its history and meaning.

The Councillor for Tourism also recalled that this year will be decorated two new streets of the processional route as are the streets Trinidad and Sixto Ramon Parro with new and restored decorations.

Music for all tastes

The price of admission to the concerts, which will take place in the multipurpose pavilion at the La Peraleda fairgrounds, will be between 10 and 20 euros.