Faithful triumphant sword, which now shines in my hand and other men and other lides already knew the glory; I venerate the nobility of your Toledan steel, which of the Tagus between the waters was recently tempered! Brilliant, tizone of fine steel, like a clear moonbeam! Brilliant, tizone, that in your light I want, to find the path of my fortune (…)¹

Like the sharp roar of a warship arriving in port, every dawn inexorably sounded what in Toledo was known as the ” factory whistle” . It was the distressing call for hundreds of workers who, day by day, went to the (sometimes painful) work at the Arms Factory. His austere groan was heard all over the city and all of us were woken up at some time, although by force of habit there came a moment in which it was no longer perceived when the subconscious assumed it during the hours of sleep. We all had a family member, neighbour or acquaintance who worked at the Toledo Weapons Factory and there are many people who have many anecdotes and experiences to tell (in our Facebook group we have opened a post in which some Toledans have shared various memories, click here)

I’ve lived in the village because I’m a manufacturer’s daughter. I have gone to the summer and winter cinemas and passed to mass in the chapel passing through the main door or ” the bosses” as we normally said. I went to the factory school one year. We went to the shop to buy. The verbena was celebrated for July 18 and we had a great time. People from all over Toledo came down happy years! (Sagrario Aparicio)

The Puerta del Cambrón (Cambrón Gate) and the zigzag that starts from this very place, was where many went down and up, entering through its two gates: that of Carlos III or Sabatini and that of Obreros (Workers). But in its beginnings it was not located on the banks of the Tagus, but in the beginning it was located in the street Núñez de Arce in what today we know as the Casa de la Moneda. It was founded by Calos III in 1761 to supply armament to the Spanish armies (similar to that of Torre Annunziata of Naples), it was in this place until 1780 that was moved to the plain of the Tagus, to take advantage of its hydraulic force by means of the Channel of Carlos III and that is the place where almost all of us have known it. This project was commissioned to the Italian architect Francesco Sabatini who also designed the Royal Palace in Madrid.

I’m sure you’re also interested: Which is the narrowest street or alley in Toledo?

Sabatini Building of the arms factory.

It was renamed Real Fábrica de Armas Blancas (Royal White Arms Factory) and later, between the 19th and 20th centuries, it was extended with new pavilions (up to a total of sixty) for the manufacture of a large number of cartridges and straight and tree-lined streets were created with good symmetry. During the French invasion, the factory suffered two major assaults, but by 1840 it began to recover, producing high quality swords. From 1910 onwards, more than 350 workers were employed to manufacture 800,000 cartridges per day. After the Civil War, construction began on what we know as the ” Worker’s Village” under the concept known as the ” Garden City”

It was a strictly military body, headed by a Colonel and as such, hierarchy, discipline and order were perfectly structured and guaranteed. The main neo-classical building, the pavilions of the workshops in neo-Mudejar style, the tree-lined streets and the ” Poblado Obrero” could be said to form a small town within the city of Toledo. There was a school, a beautiful chapel (dedicated to Santa Bárbara, patron saint of Artillery), a shop, summer and winter cinema, a library and even a night party for the 18th of July. But above all I want to highlight the importance of the Apprenticeship School.

But order and discipline did not prevent the occasional gunpowder from wreaking havoc, claiming some life; these were unfortunate moments, and when word spread that a fatality had occurred, the workers’ families immediately swirled around the Royal Factory to take an interest in their own and check that they were well. This bad news quickly spread in a few moments throughout the city, and then sadness was widespread.

There were good moments and other very bad ones too, such as the ones I have just mentioned, which made this institution have a perfectly defined identity and brand. But little by little the Royal Arms Factory of Toledo ceased its activity because it became obsolete and gradually reduced the number of workers until its closure in 1996, although some activities moved to the industrial estate and there remained the gardens and palace of Sabatini, the pavilions that hosted under their roofs many sorrows, few joys and some unforgettable tragedies and many times hundreds of frustrations of so many anonymous workers who left there their youth and sometimes their lives, were emptied. 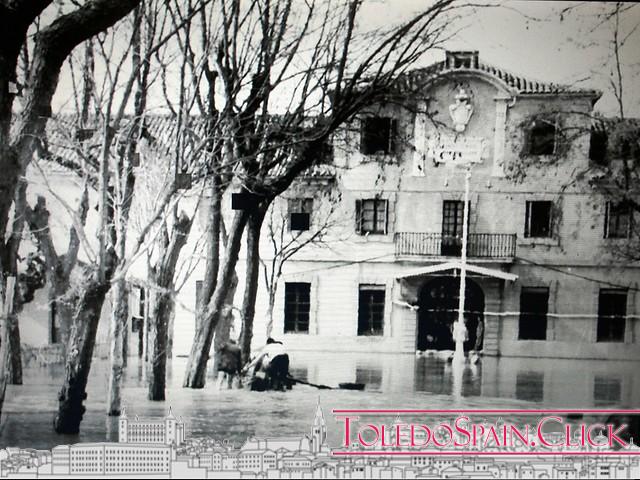 Even today, when you visit this place (converted into a University in 1998), you can perceive in the air that sad, melancholic and austere past, where most of the time the only touch of joy was put by the children and teenagers of the workers’ families, but still today, I have the impression that the sad pavilions and the silent grove have trapped that dark past and do not let it escape.

Machinery that is still preserved in one of the unrestored buildings of the Toledo Arms Factory. Toledospain

In the Royal Factory the brotherhood of the Virgin of the Amparo was created, which is the owner of this brotherhood and which could be venerated in the beautiful chapel, but when this building ceased to be a Toledo Weapons Factory, this image was transferred to the parish of San Ildefonso, where it can be venerated in front of a beautiful altarpiece belonging to the extinct parish of La Magdalena. This brotherhood is responsible for giving splendour to Holy Week on Holy Thursday, procession through the streets of Toledo with four steps of great value, closing the parade the venerated and beloved image of the Virgin.

* Some curious and wide basements are preserved under the Sabatini building, close to the river. There we can find an underground and dark space, in which in a time were located the wheels and machineries that moved by the water through the canal of Carlos III that runs to the side, communicated the movement to the pulleys of the superior nave. In this way the polishers, presses and other machines to make the swords were put into operation.

Under the walk of hundreds of current university students of the Arms Factory still hide secrets, such as the bunker that Toledospain photographed some years ago and that you can see in this link.

Is it possible to visit the Toledo Arms Factory?

Currently it is not an arms factory, it is part of the university campus in Toledo of the University of Castilla-La Mancha. From Monday to Friday thousands of university students walk to the classrooms that used to be the different warehouses and workshops. Today it is possible to take a pleasant stroll through its streets, while it remains open during the timetable of access to the classrooms and to visit some corners without any special permission.