For several months we Toledans have been listening and reading the intense debate that the archaeological discoveries in the area known as ” Vega Baja” have provoked in different social, Culturel and political environments of the city. At this time of summer, we also observe how different national media begin to take an interest in what seems to be one of the biggest attacks against the Culturel heritage in a World Heritage city. It seems that finally, the archaeological site will be preserved.

For those who read us from the outside, and do not know the subject, we could say as a brief summary that in an attractive area of the city have been discovered possible important archaeological remains of the Visigothic era. An attractive area for builders, who wish to build the area with the construction of numerous dwellings that, logically, would significantly alter these ” discoveries” . we quote the word discoveries given that for many years now all Toledans know that ” there is something there” …

And not only in the area to be built, but in all the surroundings. Let’s imagine that area since Roman times: an authentic orchard next to the clean Tagus river, with numerous trees and rich cultivated orchards. Logically, Roman villas would populate the area, and several have been discovered over the years. Very close by was the Roman Circus of Toledo, possibly a theatre and another monumental building. As is common in Roman cities, and in the current ones, around these buildings other minor buildings and accessories, totally lost, would complement the whole.

Later, after the disappearance of Rome and its dominion over the peninsula, other peoples would take advantage of the important character of Toledo as a defensive city and of notable importance in the whole government of the territory, as were the Visigoths who even chose the city as capital… The remains of this stage are very scarce in the city, only incrustations in churches of capitals and other minor remains, but no complete building.

Until now it had been thought that in the walled area of Toledo had been hidden behind the current buildings this Visigothic city, already lost, but after the last archaeological tastings in the area of the Vega Baja, some experts tend to believe that we are really ” discovering” the remains of the real Visigoth city in Toledo… We are not going to be the ones to analyse whether this is true or not, that is what the experts are for, but we really believe that if ” there is something there” it must be conserved, combining the general interest with the safeguarding of heritage.

And Toledo has this problem, like so many other monumental cities. There is no individual who wishes to do a work in the ” helmet” who does not ” fear” to discover something under his house. On occasions, especially in recent years, these small discoveries in private homes have seen the light, and the administration has taken advantage of it for its recovery and enhancement. But on other occasions, they are buried again and form part of the secrets kept by Toledo, which are still very numerous. In the ABC Toledo edition of 27 March 2006 we can read an interesting article entitled ” Ignored Archaeological Zone” , signed by Magdalena Castaño, in which she states that since 1966 the primary school pupils of the Arms Factory have been taking part in school competitions to search for archaeological remains in the area, with excellent results: 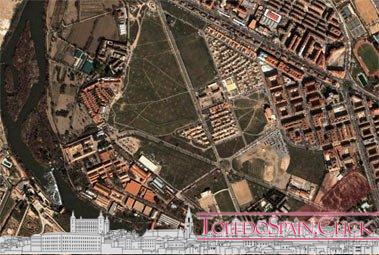 ” In the area of the present Caja Castilla-La Mancha we find several cipos with inscriptions in Arabic, IX and X centuries; lucernas or chandeliers of mud of long peak, Muslim. Therefore, there was probably a Muslim cemetery there.

And through the present Rural Box we find coins with the star of David, remains of seven-armed candelabra… therefore, some Hebrew construction, outside the market, cemetery.

In what is now the campsite El Greco, a little head of mud whose hardness of stone indicated many centuries of existence, therefore Roman: a faun. I supposed that it would have detached itself from the handle of an amphora, but its search distracted us from the discovery of a few Roman bronze coins by Trajan, Hadrian, Marcus Aurelius, Claudius… a treasure! shouted the girls palpating their weight and their great thickness.

It even corroborates what we previously narrated about the concealment of the archaeological heritage that has been carried out for centuries in Toledo:

” But I think that the best is still under the old orchards, because the sinking of a truck while picking potatoes uncovered part of a magnificent Roman mosaic. When the earth was removed, we saw the outbuildings of a Roman fifth, probably of summer, with diverse and spectacular mosaics. I informed the chief colonel of the Factory and consulted by this the High Command arrived the order to bury him, prohibiting me to follow my searches” .

Surely many readers of this website, residents of Toledo, have had some experience in this regard or know someone who has renovated their home and ” found” … I invite you to share your experiences in the comments and to comment on this hot area of current affairs in Toledo that is ” Vega Baja” .

Link to the ” Vega Baja” area on Google Maps

* In the image, area of the ” Vega Baja” . Marked in red, the area occupied by the Roman Circus of Toledo.

(26/07/06) I update this news for its current interest: Numerous Academies of Fine Arts throughout Spain, UNESCO, prominent intellectuals, historians, archaeologists, have already defined this area as one of the most important on the Visigoth culture in our country, and advocate to defend the heritage and declare this area of special interest.

As a significant fact, and although not totally comparable, anyone who knows the Archaeological Park of Recópolis (link to the official website) in Guadalajara will know that the remains it contains and those being discovered in the ” Vega Baja” have a very similar resemblance… Even Recópolis would have less scientific interest than Toledo, since the latter was the capital of the Visigoth kingdom. In Toledo NO and in Recópolis YES?

– Information about the site. Videos.

(27/07/06) Last update: ” Months and months of discussions on the tortuous urban project of the Vega Baja, where 1 was to be built.300 public housing units ended yesterday at a stroke in the press room of the Palacio de la Moncloa, where the regional president, José María Barreda, announced that this area will be ” an archaeological site and there will be a scientific and systematic excavation that will last over time and will finally offer the city, as a public space, a place that is going to be exciting for what it means historically” because, he stressed, ” it is the best thing we can do” . Read the news here (ABC)