Although the Egyptians, Greeks and Romans already used the craftsmanship of the ” Damasquinado” , it is in the city of Toledo where this decorative technique has reached the highest of fame and exquisiteness in the pieces created.

The damascene (also known as ” ataujía” ) has not only been used in the decoration of swords, but also for dishes, jewelers, and now in the most diverse souvenirs that tourists can buy in numerous establishments throughout the city. The name comes from Damascus, and the technique was brought to Toledo by the Arabs, taking root in a remarkable way (according to other versions the technique ” returned” to Toledo in the 50s of the last century, at the hands of workers coming from Eibar, where this technique was recovered by Eusebio Zuloaga, grandfather of famous painter Ignacio Zuloaga -source-)

Damascene of Toledo by Toledospain

The process of damascene is the following: the piece to decorate must be prepared by means of the striped or chopped, which consists of removing its smoothness from the surface so that it can grab the gold; not only is it obtained by scratching with a burin, but also with acids. Then he takes the gold thread and goes incrusting ; it is what is called damascene itself: the craftsman creates the figures and adornments dictated by his imagination, although normally following secular models.

Then the thread and the gold put are fixed in the steel by hammer and burin. Then comes the bluing : so that the steel on which the gold has been fixed does not oxidize, it is put to the fire with a solution of caustic soda and potassium nitrate; the pavon, that is to say, the steel, comes out black, on the other hand the gold or the silver, remain unalterable. From there the piece is taken to the final finishing, which consists of ” giving movement” to the gilded surface, giving it ” relief ” based on chisel and hammer, finishing the drawing of the gilded ones. 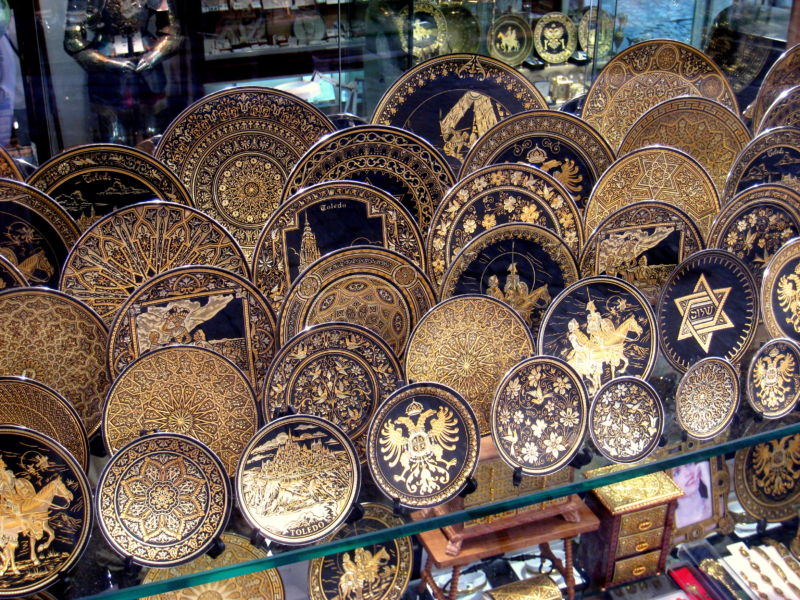 Photo: nabisco79 at flickr.com. Click to enlargeAs we see is a slow and very handmade task, which is sometimes not appreciated by buyers, essentially tourists, who are unaware of the intense work done. In some shops of the city, the same craftsman allows to see part of his work, which in many occasions surprises by the thoroughness of the work.

The difference between a good handmade damascene and a ” tourist” damascene is the following: in the damascene made for the tourist, low quality gold is used; and so it happens that after a short time the piece oxidizes and becomes ugly. In addition, these damascene are not made by hand, but by machine and in the same time that a good craftsman makes a piece, a machine makes five hundred. If you buy a damascene, check the quality of it, although detecting the good from the bad is not easy…

Ways to detect the good from the bad? Price is not a criterion, since you can pay the same for a hand piece as for a machine-made one… Experts know how to distinguish one piece from another: normally machine-made pieces do not usually have only thread drawings -that is, lines drawing-, but larger and flatter surfaces. But the best thing is to pay attention and if it is handmade the ” pulse” of the craftsman will be perfectly noticeable in each one of the blows. For greater security, the best thing is to buy the pieces in the different shops that are distributed by the city, especially in the helmet. In some of them you will be able to check how the pieces work before they are put on sale. 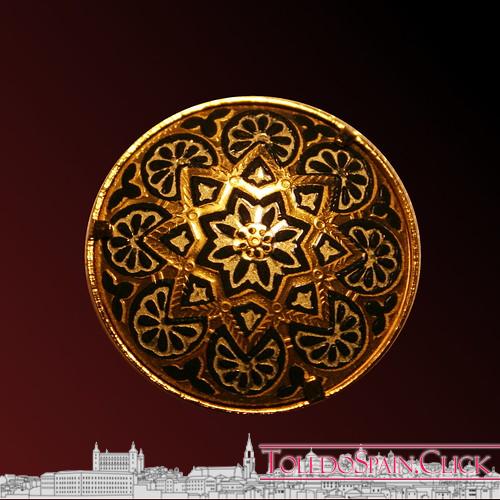 Another thing that the buyer must take care of is quality, the fact that it is handmade is not everything: it also influences, as is logical, the complication and beauty the motive and the dexterity or ” clumsiness” of the craftsman who has done that work and for that there are no other rules than to fix yourself well and have good taste before taking out the credit card.

And when you have bought a piece of this value, how do you take care of it ? As recommended by the craftsmen, although the pieces are treated with special products to improve their conservation, it is not advisable to wet or subject the piece to strong humidity. If it gets wet, it must be dried immediately. For this reason, in coastal areas it is advisable to store the piece in showcases that prevent humidity and saltpetre. They should not be used to clean abrasive products, nor to clean glasses or foams, nor to use humid cloths. It is recommended to rub the damascene surface with breadcrumbs or a soft eraser to recover the brightness and color.

Some Webs of artisans: