In 2018 (in the month of July) it is the 20th anniversary of the opening to the public of the prisons of the Posada de la Hermandad, which after an important intervention that was carried out by the always effective Toledo Workshop School, opened to the public a very interesting part of the oldest civil building in Toledo, whose history goes hand in hand with that of the institution known as the Old Brotherhood of Toledo.

The Posada de la Hermandad is located in front of the street known as Calle de la Tripería (today Sixto Ramón Parro) and is on the border with the Market and the Teatro de Rojas. It is a three-storey building including the basement where the prisons of the Santa Hermandad Vieja de Toledo were located. Through the main door the quadrilleros entered the hallway where the guard’s body would possibly be, from where there was access to a room located to the right that could be the office of the Court and where the cabildos took place. In the basement were the four dungeons (three in the beginning) of rectangular and vaulted form, whose access was through a staircase where there was a rake, to avoid that the prisoners could escape. On the first floor of the building was the courtroom where the trials of detained prisoners took place.

History of the Holy Old Brotherhood of Toledo

The former Brotherhood of Colmeneros de Toledo, later known as the Santa Hermandad Vieja de Toledo (Old Brotherhood of Toledo) was created by the owners of beehives to put order and monitor their properties and the territory where they had jurisdiction. The area between the Tagus and Guadiana rivers had remained since the beginning of the 13th century as a region with no defence, close to being repopulated and which needed control and vigilance over its properties, hives, livestock, etc. These new owners had to group together to fight the golfers and looters who continually plundered them. It would be at the end of the 13th century, when this brotherhood from Toledo -which had similar brotherhoods in Talavera and Ciudad Real as companions, as we will see below- already appears in the documents, receiving the support of the city of Toledo itself.

Frescos of two squadrons and the coat of arms of the Imperial City painted around the entrance door to the Chapterhouse of the seat of the Old Brotherhood of Toledo. Year 1925 approx. Historical Archive of the Nobility. Symbol: Torrelaguna, c. 2, d. 24 (3).

In November 1300 a meeting took place in Aliseda de Estena (currently Navas de Estena) between toledanos and talaveranos, in order to draw up an order which regulates the way of acting, collaborating and monitoring the territory. Shortly afterwards, in August 1302 and also in Aliseda de Estena, the order would be renewed to receive the members of Villa Real (now Ciudad Real) with whom the new name of this grouping would be the Brotherhood of Toledo, Talavera and Ciudad Real.

Successive privileges granted by kings like Fernando IV, Alfonso XI, Pedro I or Juan II, will make the brotherhoods take on special importance at the time of administering justice and that their squads were feared and respected throughout the region. One of the usual formulas to punish prisoners and golfers who caught the squads was the asaetamiento, which will remain in force until the time of Charles I, who in the Courts of 1532 prohibited this cruel system and ordered ” do not asaeten anyone alive without first choking him with a club.

The term ” cuadrillero” could derive from the use of the arrows called ” quadrillos” that had a certain square iron and pointed, although some other author (Páramo: 1925) pointed out that the origin came from the distribution in cuadrillas of the members of the brotherhood.

It would be precisely the grandparents of Charles I, that is to say the Catholic Monarchs, who reorganized the brotherhoods and extended them to the whole kingdom in 1476, in the Cortes de Madrigal. In addition, in the case of Toledo, the brotherhood was given a new building and headquarters, in which not only were the prisons for the detained prisoners located, but also a meeting room, chapel, guard corps, stables, etc. During the 18th century these brotherhoods continued to watch over the beehives and the mountains, collecting certain taxes such as the dozavos, but it would be with the Decree of 7 May 1835 when Isabel II dissolved the ” Holy Brotherhoods named Toledo, Talavera and Ciudad Real” .

As for the building that was the seat of the Toledo brotherhood, after being disentailed it was auctioned off, being acquired by Luis de Salcedo. Upon its death, it was transformed into an inn and hence the current name of the building.

The Bad Fame of the Holy Brotherhood

There was a popular copla in the seventeenth century that said:

Three saints and an honest

have the kingdom ravaged.

The veiled references of this copla went to the Holy Inquisition, the Holy Crusade, the Holy Brotherhood and the Honored Council of the Mesta. 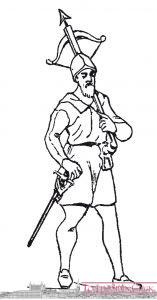 In an inventory of the prison of the brotherhood dated 1747 we find the following instruments that give us an idea of the inhuman treatment given to the prisoners who were detained by the squadrons: a colt of pine to give torment; 21 pairs of crickets; 12 of wives, 11 of shackles and another of half moon; 10 arrobas of chains; a big chain and another medium chain; 2 padlocks with key for them; a clamp with two needles in the prison below; another padlock for women; a seal to mark those sentenced to 200 lashes; 4 sayos of green cloth and 4 crossbows.

In the ordinances of the brotherhood of the sixteenth century, established the penalties to be applied by the quadrilleros, for example, if the defendant stole up to 500 maravedíes the punishment was 100 lashes and loss of ears, if the number reached 5,000, mutilation of the foot and prohibition of the thief under penalty of death to climb ever on horseback and who stole 5,000 maravedíes or more, was asaetado in the field by the quadrilleros with thirteen arrows. The same ordeal was given for theft of property, rape of women in depopulated areas (as long as they were not public women) and for deaths and malicious injuries.

New times and new uses of the building

As we already mentioned, since the 19th century and after its confiscation, the building was used by the heirs of Luis de Salcedo as an inn for merchants and trajinantes who came to sell their products in the city of Toledo.

The building became news at the beginning of the century (El Castellano newspaper of 7-10-1919), since according to certain rumours, there was someone interested in tearing out all or part of the decoration of its façade in order to sell it later, in which under an ogival arch were the coat of arms of the Catholic Monarchs, their emblems with the Gordian knot and the arrows, the figures of two squadrons and another coat of arms of Philip II. The news was quickly transmitted to the Provincial Commission of Monuments of Toledo and to the mayor of the city, as well as to the Minister of Public Instruction and Fine Arts, insisting to the Toledans that they were very attentive to this warning, so that no element of this façade disappeared. The press also dropped another news in which they claimed that the owner of the Posada de la Hermandad wanted to sell the front of the building for two thousand duros (El chiquitín de la prensa, No. 62 of 8 April 1899). Whether that news was a hoax or not, fortunately the façade remained intact and we are still conserving it with the same elements, with the exception of the coat of arms of Philip II which is conserved inside, after the restoration carried out a few years ago by the City Council of Toledo.

Under the Royal Order of March 3, 1920, the Casa-Posada de la Santa Hermandad was declared an Architectural-Artistic Monument, motivated by the rumors of sale that hovered over it. According to the declaration, the Posada de la Hermandad was ” one of the most typical examples of the 16th century and civil construction, backed by its history, a reminder of one of the legal institutions such as the Santa Hermandad, the forerunner of other modern ones, for which the conservation of the building is imposed” . That declaration was echoed in the press of the moment.

A few years later, concretely in 1931, we find in the Toledo newspapers the following news: The Posada de la Hermandad is handed over. To deal, in the same with Pablo Gonzalez. Toledo.