We offer our particular tribute to the courageous Castilian soldiers who died during the ” War of the Communities” all over Castile, confronted with the imperial troops of Charles I, with this ” legend” that speaks of Maria Pacheco, ” The Lioness of Castile” , who defended Toledo until nine months after the defeat of Villalar.

The night in Valladolid is hard, cold, dark… The deserted city hides in one of its streets three gentlemen who, nervous and terrified by the cold, wait for their prey. Although the city is home to the great communal army commanded by Juan de Padilla, not a single soul dares to cross its streets.

The men watch and wait for the one who, one night a week, dares to mock the city guard and visits with impunity the beloved of one of them. Fearing the worst, this knight, sword in hand, hopes that today is the night that will kill the mysterious visitor.

The hours go by and one of them warns the others, because a shadow crosses the street, quickly approaches the house and enters without giving time to catch up with him. The three gentlemen, enraged and eager to put an end to the supposed lover, return to their hiding place waiting for him to leave the house.

After an eternal hour, the locks give way with a shriek and a mysterious gallant appears who closes the door. The three men run towards him, sword in hand and barely leave time for the knight to draw his steel and try to defend his life. In spite of the unequal fight, he defends himself with honour, but it doesn’t take long for him to receive a hard rapier on one side that leaves him battered. Another blow of one of the men and falls to the ground, unarmed. They were about to kill the man, lying on the ground, almost unconscious, when a loud voice shouts to stop the combat from one end of the street.

It was Juan de Padilla, chief of the Communeros and therefore of those three men.

The maiden, alerted by the voices, leaves the house and finds her brother lying on the floor, and cries out to beg for her life.

Thus, Padilla and the three men knew that the wounded young man, although belonging to the Emperor’s army, was the maiden’s brother, and that he came every week to visit his elderly father and sister. After listening to the maiden, he ordered that her wounds be healed and that she be treated with the utmost care in the face of his skill and courage in crossing such an intense guard established in the Castilian city. 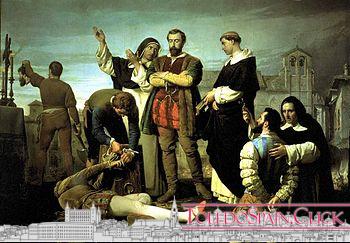 Time passes and the communal flag has been humiliated. The emperor’s armies, triumphant in so many European lands, have turned Villalar into the tomb of Castilian liberties. Many brave soldiers died there along with their leaders Bravo, Padilla and Maldonado, who are beheaded while Padilla commented:

” Mr. Bravo, yesterday was the day to fight like a knight… today is the day to die like a Christian.”

Also the city of Toledo from 1521 has been the scene of bloody carnage ordered by Emperor Charles I, ending privileges and rights of the Castilian people. Even the palace of Padilla in Toledo has been razed to the ground and its plot sown with salt so that nothing grows on it.

The widow of Padilla, Doña María de Pacheco, nicknamed ” the Lioness of Castile ” has become the leader of the Toledan revolt and put in capture, has to hide in the Monastery of Santo Domingo to flee from the imperial troops.

Read
The Angel of the Hinge Door

But the Emperor’s anger has not calmed down, and he orders the removal of all Toledo to find the wife of the commoner who has dared to challenge him. The soldiers remain occupying the city and guard gates, walls and bridges to prevent the departure of the brave woman. The movement of neighbors, merchants, religious, beggars, etc., is the habitual one by the doors of the city: all enter and leave by the Vega, by the Door of the Cambrón, and all are forced and registered by the soldiers.

A small group of soldiers guarded one of these posts when one of them noticed an apparently elderly woman completely covered, including her face, with a handkerchief and accompanied by a child. The woman had looked the soldier in the face, and the soldier, with little time to react, had given an exclamation of surprise which alerted his companions.

Thus the soldiers momentarily abandoned their guard, ready to toast to avoid the pains of their companion.

That soldier, who had so skillfully removed surveillance from the post, was that young knight whom Padilla once saved in Valladolid, who had recognized the villager’s widow disguised as a villager and escaping from Toledo.

The imperial soldier thus rewarded the attentions of the deceased commoner, and paid a debt of life to the memory of the illustrious Toledan.